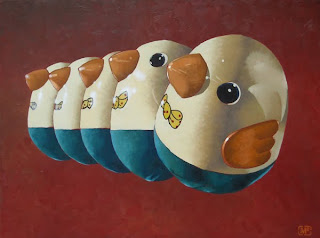 
The reference photo for this painting was taken four or five years ago while on a photography trip to Chinatown and Kensington Market in Toronto with my friend, Stephen Fenech. He's an amazing photographer (and superb world traveller) and I thought it'd be great to do a project together. The idea was that we'd shoot subjects in tandem and then have a joint show somewhere (after I'd made paintings of my own photos). And all the subjects had to be things that were in tandem as well.


We stumbled upon this display of toy birds in a now-defunct skate shop in Kensington Market. The display was actually five or six shelves of these identical birds about 6" tall, all lined up in neat rows...except the top shelf had a single bird tilted as you see it in the painting. And that's the photo I took and chose for my Tandem item. The sun was setting and the birds were bathed in beautiful golden light. Had I known this image would be so popular, I'd have taken several different angles to work from.


In 2007 I painted a smaller version (about 16" x 20") in oils using that photo (that painting has the shelf in it, which I chose not to paint this time) and it got a lot of attention at the Queen West Art Crawl that year and sold for a higher price than initially marked.


I knew I could do a better job of it and its popularity at the QWAC made me want to paint another, larger version so in 2008 I set this up on the canvas (with a bright green underpainting!) but it sat barely started in my studio for nearly a year before I had the time to actually get to it some time this summer. The popularity of the birdies this time was even greater, judging by the comments and interest on Facebook and Etsy. It was sold earlier this month to become a Christmas gift which made the recipient very happy. I am now considering making prints of this painting and perhaps variations using different background colours, or even smaller paintings of single birdies. 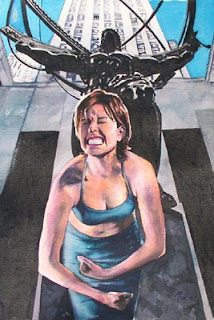 
The cheeky humour in this piece is straightforward; title tells all (actually, the title simply reiterates what you're already seeing in the painting).


The black areas in the shadows of the building and Atlas were done with ink because I wanted those to be as black as possible.


This is yet another composite of two separate photos.
Location of Atlas: Rockefeller Center in New York City.
Location of Ashley: my studio in Toronto. 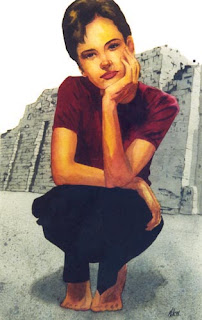 
This black and white background of Egyptian ruins may probably have benefitted with some colour --at least a blue sky. What was I thinking? I don't remember.


Her skin is overly yellow here because I wasn't colour correcting my photos during the painting process and instead painted the colours existing in the photo --which were a result of low incandescent light and long exposures. Some time in 2001 or 2001 I bought a blue filter for my 28-210mm lens which corrects yellowing on long exposures and has given me some nice photos with more accurate colouration (sometimes with a bit of a blue shift, but that's probably operator error).


The title is inspired by the Jill Sobule song of the same name and the posing of the model supposedly reflects the emotion and intention of the song (in hindsight: maybe...but only too subtly).