Blizzmax "On A Roll" Group Show 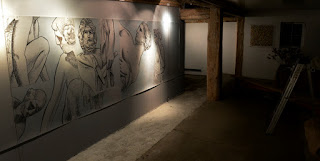 Facing the back wall (ladder for scale).

A couple of months ago I was invited, along with six other Prince Edward County artists, to participate in "On A Roll," a slightly weird art show that had us make our stuff on 30 feet long, 4 feet high sheets of paper, wrapped around the Blizzmax Gallery walls.

It was an interesting challenge: what medium is best suited for this? what should I do? when will I have the time to do any of it? My solution came quickly during the first meeting to decide how exactly we were going to this; I was going to use the Roman statue montages I made for an earlier project that didn't materialize, and draw them using pencil, for ease of working and speed.

I went in with Chrissy Poitras on the day the paper went up (June 2) and, when we arrived, around 9pm, Carl Wiens was already hard at work on his section. I like them and their work a lot and being in the same room with them (albeit on the opposite side of that wall) made it a fun night. I stayed until around 1:30am, satisfied that I was done. 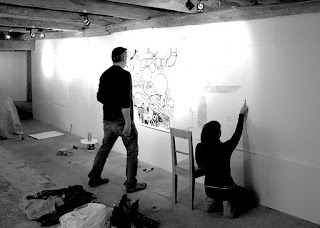 I have no idea if/how any of this will (or can) be chopped up for sale, but I don't really care; it was just fun to do this. 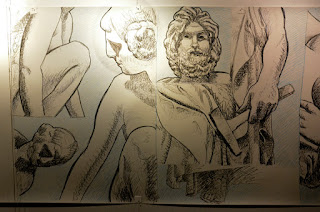 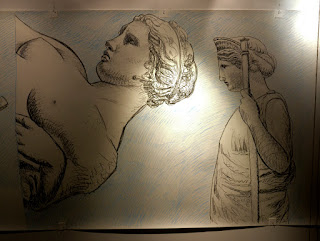 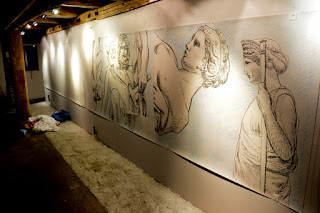 Facing the front of the gallery.

These photos are lousy, I know...so come see the show in person: