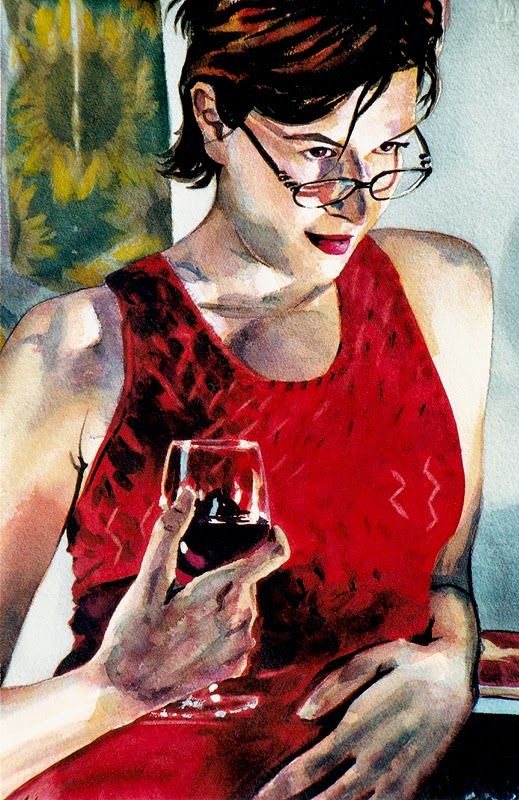 
This painting is an attempt to loosen up a bit and not be so blendy and smooth. It looks pretty good in her neck and right arm areas, but I may have used a bit too much indigo in the flesh tones, making things a bit muddy in her lower jaw and her hand that's holding the glass.

What looks like a second signature in the bottom right is actually an abstraction of a book title on the shelf on which Ashley is leaning. On top of the shelf (with the burgundy and beige cover; barely visible) is an excellent film noir movie poster book called "Crime Scenes".

In the top left is a painting from my Sunflowers series. 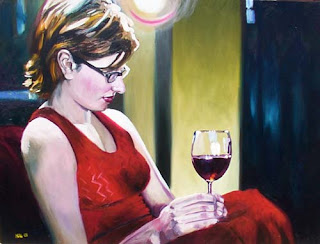 
This painting is one of my First Four oil paintings (along with this one and this one and one more which isn't good enough to be shown and will be painted over once I get my hands on it again) done just before my Interiors series.


There are bits and pieces here and there I think are successful (the intense highlights on the hair and glasses just below the light, and the sharply-focused glass against the blurry background) and there are others I'd like to paint over and fix with the benefit of now having eight years' experience. I did go back and touch up the light flare, making it less pink, and I fixed the hand a bit, but this here is an earlier photo of the painting before the changes.


This painting is also not in the Runnymede Library show which ends this Saturday (28 March). 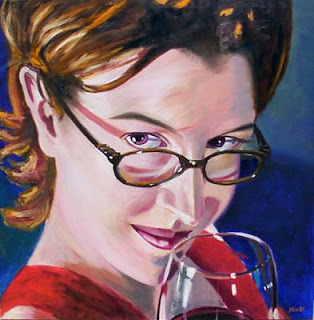 This painting isn't in the Runnymede Library show, either.

This is actually my very first oil painting after having abandoned that medium after only a few attempts in high school. I initially bought two 36" x 36" canvases with the intent to use a special gesso that, supposedly, would enable me to paint in watercolours on them. I prepped the canvases (but probably incorrectly) and the watercolours just weren't working, so I decided to try an opaque medium and chose oils over acrylics. The other painting done in conjunction with this one isn't worth showing or seeing.

I think her eyes and the right portion of the glass tunred out nicely, but I think the blue background could be less saturated.

As the title suggests, that's not wine in her glass --it's Coca-Cola. I simply didn't have any wine on hand during the photo shoot and that was the only dark drink handy. 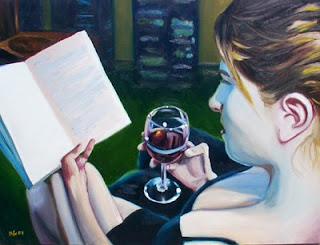 Nope, this painting isn't part of my show still going on for the remainder of March at the Runnymede Library, but it deals with reading and has Ashley, so I it's at least thematically related to the last post. It also deals with booze, and for anyone going to see the art show, there are several nice pubs in the area --and an LCBO right across the street from the library itself.

This painting is among my first four oil paintings done right before (and this one directly inspired) my Interiors series. Here, Ashley is reading the same Joseph Campbell book as Aisha and she's almost in exactly the same spot in my studio as the previous post, but from an earlier photo shoot (you can tell by her hair's length). Also, that's not wine in her glass. Also-also, pardon my French. 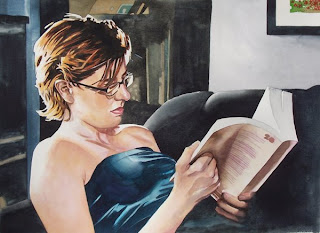 This was done specifically to mark and celebrate my 20 years of painting in watercolour (since 1988, beginning here), as slyly noted by the "20" I included on the back cover of the book Ashley is reading. I really wanted it to be special, so I used a full sheet of watercolour paper and gave it my best shot. 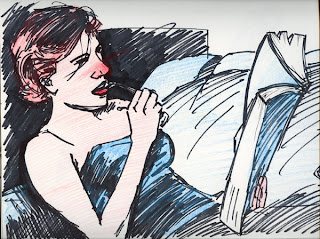 I tried a few different poses with Ashley reading on the couch, and the above sketch is from a photo I very nearly used for the final painting. I still may use it someday...

I did yet another version of Ashley reading on the couch (with added books) for my 30th anniversary.