Showing posts from October, 2016
Show all

Lost in a Riddle 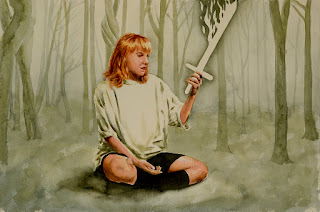 This concludes the unexpected trio of moody, figures-in-a-forest paintings along with Artificial Heart and Things Are Looking Up. Read about the influence of painter Jon J Muth (on these three paintings specifically, and on my overall practice in general) in the posts for the other two pictures. And, more comprehensively, here.

Detail showing off hair.
In many ways, it still looks like the way I've been painting hair (in watercolours) for a long time, now, but in some small ways, the hair here has some Muthiness that makes me happy. I'm beginning to get the hang of this, I think.

Some of my work on this painting was streamed live and you can watch a recording of that here.

Things Are Looking Up 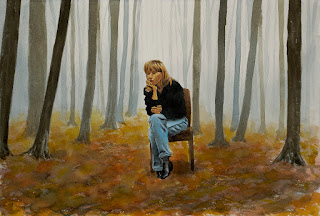 As with Artificial Heart and Lost in A Riddle, I was going for a mood and technique (mostly for the woods) inspired by Jon J Muth's work in his Dracula graphic novel. The trees are pretty good, but my autumnal forest floor could stand quite a bit of improvement. I think I might need a lighter touch. Still, I'm happy with how this painting turned out, creating the mysterious and melancholy mood I intended.

Some of my work on this painting was streamed live and you can watch a recording of that here.

And yes, I've used that reference photo of Sue once before...22 years ago. 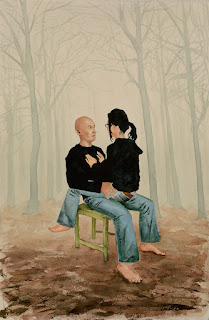 22" x 15", watercolour, 2016
I mention in this post the inspiration certain key artists that got me fired up about painting in general, and watercolours, specifically, but here I am, nearly 30 years later, starting to really learn from them.
The mood and the trees are heavily influenced by Jon J Muth's work in his Dracula graphic novel; it's my own scene, but I wanted to see if I could evoke even a tiny bit of Muthness in this painting. I think I did, in the trees, but the figures appear to be undeniably mine (for better or worse). I'm happy with the result.

Conceptual sketch.
In fact, it was after deeply considering the sketch above that I decided to go with a forest setting and carry that over to Things Are Looking Up and Lost in a Riddle.

Back in 2008 I did a very small series of paintings of some of my friends sitting on a green chair. The common idea was they all wore jeans, were barefoot, and my stained-glass-like matrix of geometric patterns was to feature…
Post a Comment
Read more 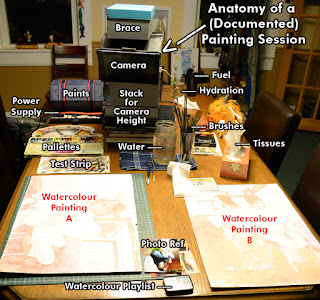 Another video of me working on those two watercolours (Inside a Broken Clock 1 & 2) that I started in a video from a couple of days ago. This video is also very silent as I didn't have much to say, so feel free to listen to some music as you watch. Visually, among much else (like when I take a painting away to use a hair dryer on it to speed up the drying process and also to "lock-in" certain bits so they don't bleed into other areas and make a bland mess), there's a whole lotta denim going on...


My camera set-up is pretty hilarious when I do these Facebook videos because I have to elevate Krista's iPad high enough for a good view of the painting.

Documentation of my documentation.
The only thing that differentiates my set-up for recording my painting sessions and my normal painting sessions is the tall stack of books supporting and iPad. Behind that stack is my laptop for break time entertainment, illustration work, etc.

October 20, 2016
For this live painting session, I decided not to prep too much before starting, so you can see exactly how I start a painting, therefore, the majority of the video (just under 2 hours) is me blocking in shadows with violet (actually, technically, Permanent Magenta). My commentary is sparse, as I spent the morning stacking firewood on the front porch (and was, therefore, pretty tired), plus, beyond "blocking in shadows," there's not much to say. Instead of silence (or worse, forced blathering) I had musical copyright-approved accompaniment from Supposubly.

The same technical issues from the previous Facebook video return and I manage to invert the camera before too long so you can actually see me painting (rather than seeing the back of my hand), but the reversed view continues, so I, again, appear to be left-handed (not that there's anything wrong with that). 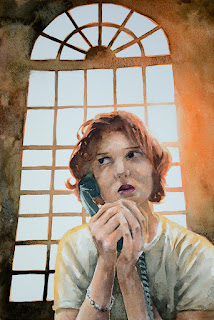 The technical challenge here was to see if I could transform a silhouetted window to look as though the sun was beaming through it. Taking a cue from, and looking at artwork by, one of my favourite illustrators, Bernie Fuchs, I did the best I could. I think the hot spot turned out pretty well, considering I improvised the lighting in this scene. The lighting on the woman, on the other hand...

The model here is the same young woman I photographed when she was in City of Angels (her cast photo is in this post); I did a number of small mini posters featuring much of the cast, and some in their double roles.

October 14, 2016
The video below is just under 90 minutes of me working on two watercolours which I live-streamed via Facebook...and provided dubious semi-instructive, mildly interesting "play-by-play" style commentary. Initial technical difficulties aside (the image orientation gets corrected pretty soon after the start), it's fairly watchable.

The footage is reversed so that I could monitor my framing using the iPad's screen, so it looks like I'm working left-handed, but I'm not (not that there's anything wrong with that).

For the curious: the painting with the flaming sword is titled Lost in a Riddle, and the autumnal painting is titled Things Are Looking Up, which are both part of a trio of Jon J Muth-inspired misty forest scenes along with Artificial Heart, and all three are part of my recent 13-painting watercolour project (of which, only two (yet-to-be-painted ones) are actually related).

For the curiouser: my previous painting using the same model ref as the one i…
Post a Comment
Read more

With Fever You Will Have A Bout 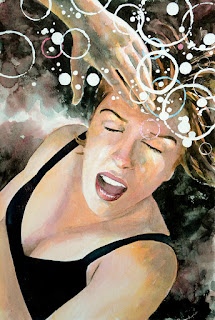 22" x 15", watercolour, 2016
That's my friend and often-used model, Ashley, once again –this time apparently experiencing some kind of feverish delirium. Taking into account a couple of miscounts and do-overs (or whatever) this very well may be my fortieth painting featuring Ashley.

This a re-use of reference previously used for Pure as a Lover's Desire, Evil as a Murderer's Dream...which is, admittedly, third-season-Star-Trek-level of too long a title.

I used gesso for the wobbly circles and dots.

The title is borrowed from a line in Michael Penn's song Strange Season. I've borrowed from him before for these paintings (at least!): Virtuous or Virtual?, Close, Figment, and Wall. 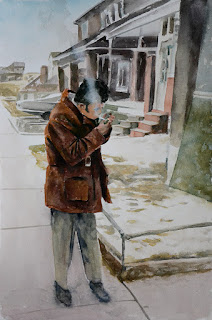 My very first post for this blog was a portrait of my dad I painted in 2000 and, exactly four years later, I uploaded an improved scan of that painting for my 300th post. This is now my 700th blog post but it's not any anniversary of this blog...but today is my 45th birthday.

This is another portrait of my dad, painted from a photo taken about 45 years ago as he lights up a cigarette in front of our first house on Dundas, right across the street from Greenwood Park in Toronto. The photo captures a nice candid moment and I've wanted to paint this for a long time, but I'm not sure I successfully captured the coolness of the moment (or the coolness of that jacket!). 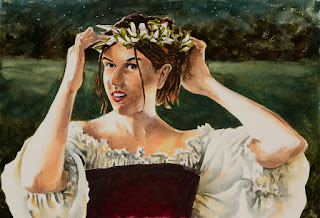 15" x 22", watercolour, 2016
The outfit Ashley's wearing here is the same one as in Embroidering the Truth (a peasant dress from the Opera Carmen, which I had access to when I worked as a costumer for Malabar's Opera Department last decade).

Speaking of Carmen, I've painted Ashley wearing the actual and gorgeous Carmen dress several times: in a mock-up poster for the opera; a mural in a café in Picton; a monochromatic experiment in oils; my big Silver Jubilee painting; and a rather absurdly illustrative painting with elements from the opera itself.

I guess, technically, the stars should be out of focus like the background foliage because of the implied shallow depth of field...but if it's okay in a few shots in the Emperor's throne room in Return of the Jedi...

(only Palpatine should be in focus here) 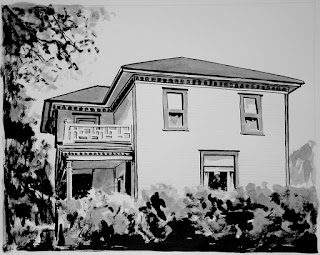 This was a recent commission painted for the anniversary of a couple of friends, Clinton and Liz, who now live in this house just outside Picton.