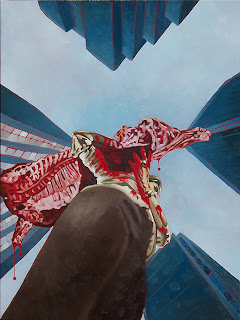 The extreme low angle of this allows the negative space between the skyscrapers to create "crosshairs," effectively targeting the bloody side of beef on the business woman's shoulder. Keeping in line with the surreal and stylized nature of this series, I chose to keep the drips here stylized as well, falling parallel in relation to the actual canvas, rather than being in realistic perspective, falling from the meat towards the viewer.

Part of my Meat Matters series. 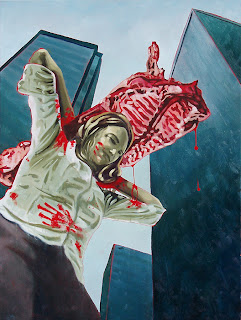 Sometimes my paintings are made up of photos from different shoots –deliberately taken separately for whatever reason– to be composited later, as in this series. I rode my bike down to the financial centre in Toronto one summer to shoot the "background plates" of the tall office towers. I then shot my models in my studio to match, miming the cow parts by holding pillows. The blood was improvised based on various research images.

Part of my Meat Matters series. 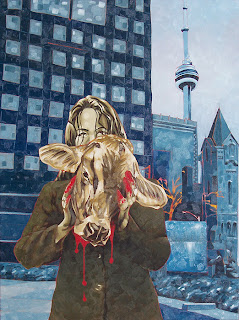 Being an omnivore and growing up in the big city of Toronto, I began to feel very disconnected with the source of the food that I ate in the last few years I was living there. Using The Sacred and the Propane as a starting point, I developed the Meat Matters series as a way to confront (and confront others about) the nature of our food –that is, living things that die for our sustenance, rather than simply being dead objects bought in a grocery store. The intent of these paintings isn't to say "don't eat meat" or "don't kill animals," but rather "if you do [directly or indirectly] kill animals for their meat, consider and respect them."

The concept of the first few paintings of this series was to depict young business men and women in the financial district of Toronto (around Bay & King) fending for themselves and slaughtering cattle to take home and consume. It evolved slightly with Butcher and Dinner, but I got sidetracked by other pressing matters before it became a larger series. However, I did get to pay tribute to the actual source of the food we eat by painting a number of local Prince Edward County farmers in my Field to Canvas series, which was a natural extension of (and sort of the flipside of) Meat Matters.

Stylistically, I approached the first few paintings in a monochromatic way, giving the backgrounds and the figures their own thematic colours, enabling the red blood to really pop.

The Sacred and the Propane 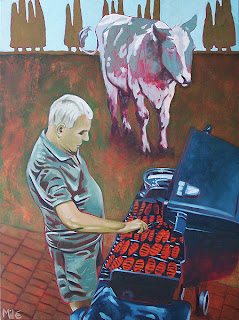 This is my dad barbecuing some kebapi. The cow in the background was always intended to be in the composition, but it wasn't until this painting sat around my studio for a few weeks, the cow halfway done with that ghostly aspect, that I realized that I had to leave it like that. The trees in the background are cypress trees which are very common in Macedonia, the birthplace of my parents.

This painting is an important one in my artistic development for more than the way I dealt with the cow and grass, texturally –it's also the first time I used the red underpainting as a design element, leaving a red outline around most of the subjects in the painting.

A couple of years later, this painting served as inspiration for a new series dealing with meat matters and our (mostly disconnected) relationship with the food we eat. Read about two other paintings from that series in my post about the Sommerfest show at Blizzmax Gallery. 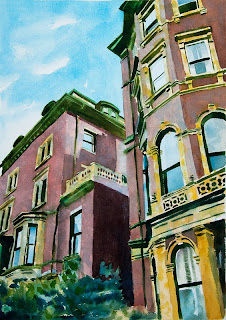 Clearly, I was quite taken by the architecture of Boston –mostly the old stuff– and my dozens of photos will attest to that. Unfortunately, I only ever painted two watercolour and two ink paintings to mark that fact. I'm currently revisiting a number of figurative-based reference photos I've taken over the years and reusing them for some new oil paintings, so maybe another "trip" to Boston (via brush and canvas this time) will happen as well. 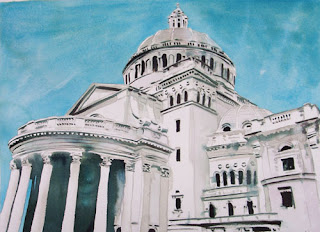 While on a road trip to Boston about ten years ago, I snapped dozens of photos as reference for future paintings and this is the first watercolour I did from those pics. I intended the series to be more than two paintings, but that's as far as I got. I'd love to return to this city...and I'd love to continue this series...

This is the Christian Science Mother Church and, despite not being religious, I find its architecture stunning. 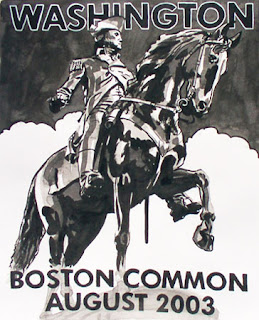 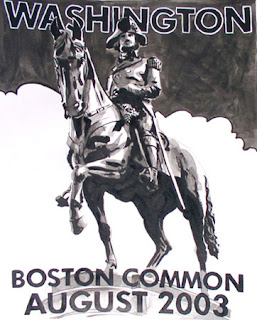 In the summer of 2003 I went on a road trip* with my sister and my cousin to the east coast of Canada and then south into the States as far as Boston.

We didn't see very much of it or stay for long, but I really liked Boston and its amazing juxtaposition of centuries old architecture right next to shiny new buildings. Fore future painting reference, I took tons of pictures with my Minolta and these two paintings are (very obviously) based on my pics of the statue of George Washington in Boston Common.

I did these two as souvenirs for my road trip mates and the inclusion of text was inspired by old travel posters. The photos of the paintings themselves are a little wobbly since I took them before they were framed –I assure you, the baseline for the text is a little straighter than it appears here.

*Incidentally, just as we crossed back over the border, we encountered several power outages which we discovered about an hour or so later were related to the Northeast Blackout. 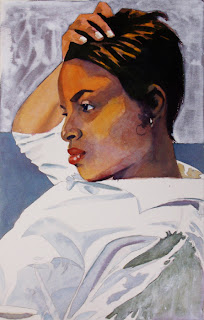 Experimenting with opacity vs transparency here, I painted the background and lower right area of Aisha's shirt with dark watercolours, then applied a thin wash of white ink after it had dried. The effect is interesting, and I experimented further with light-over-dark painting after that, but only in oils (noticeably in this painting and this other one).