Showing posts from July, 2009
Show all 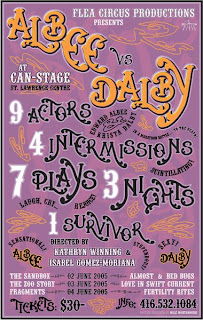 17" x 11", digital, 2005 Since Krista's a great playwright and Edward Albee's a great playwright and their last names kinda rhyme (and for those reasons alone), I joked for months that they should have a Short Play Showdown: Albee vs Dalby. So I made this for her birthday in 2005. The "marathon battle...to the death!" begins on June 2nd and culminates with "one survivor" on June 4th, Krista's actual birthday. By the way, Almost is my absolute favourite of Krista's plays. Also: the women listed as directors are friends of ours. The style of this was inspired by old circus posters and other text-heavy posters of the 19th century.
Post a Comment
Read more 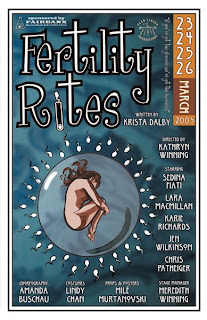 17" x 11", ink and digital, 2005 This was a play performed in the Alumni Theatre's New Ideas Festival a few years ago and was written by my girlfriend, Krista Dalby, who is an excellent playwright. More on her other plays later. Fertility Rites is about a woman who feels her biological clock ticking and brings a couple of friends with her to a fertility clinic. The image of a nude woman in an "egg" surrounded/pressured by sperm came to me very quickly. I had numerous other poster ideas, but they were variations of other concepts; this image hadly varied in my sketching phase (see below). The play takes place in the waiting room of that clinic, so I thought it'd be fun to have the show "sponsored" by them. And, in case you're wondering, that is, indeed, a giant sperm serving to dot the "i" of the test tube...so with a little more sperm (to scale this time) at the bottom of the tube, and the sperm surrounding the woman in the
Post a Comment
Read more 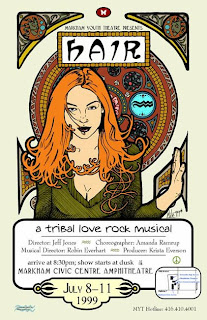 17" x 11", ink and digital, 1999 Back to the posters. I was approached to do the poster for Markham Youth Theatre's production of Hair a short time before they were to do City of Angels (by different friends/directors). Despite not being a huge fan of musicals, I do enjoy making posters, so the project was a lot of fun --especially since I had a lot of leeway in the design. For Hair, I decided to heavily base the design and illustration on the art nouveau stylings of Alphonse Mucha , whom I adore greatly (and stole from quite obviously). The layout and graphic background is straight outta Mucha, with the young woman in the foreground being from some found reference and her hair given the Mucha treatment, what with those curls and all. The illustration was done in ink, then scanned, then coloured (and the text was laid out) digitally. I also designed the t-shirts for the production and, once again, stole a bit from Alphonse for the MYT logo on the fron
Post a Comment
Read more 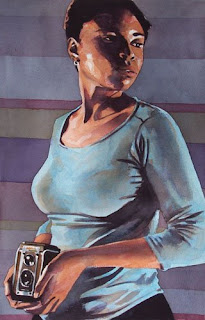 Aisha with Camera 2 22" x 15", watercolour, 2008, private collection That's right: you've seen this painting before . I'm reposting it as it has been chosen to be in the 84th Annual Open Juried Exhibition of the CSPWC/SCPA (The Canadian Society of Painters in Water Colour / La Société Canadienne de Peintres en Aquarelle) at the Leighton Art Centre in Calgary, Alberta. The exhibition runs from 5 September to 24 October . Only 63 paintings were accepted out of over 300 images that were submitted. I'm honoured to be part of this show. This painting is being framed as I type and will be ready for shipping this weekend. Leighton Art Centre , 7160 Fisher Street SE, Calgary, Alberta, T2H 0W5
Post a Comment
Read more 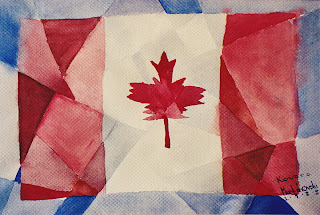 Cultural Mess (with Peter Kovacs) 15" x 22", watercolour, 1988 This painting goes waaay back to the very beginning of my watercolour experimentation. It's my second watercolour ever (and I still have it!). This was done in my high school art class as a collaboration with my friend, Pete Kovacs. I don't remember why we chose the Canadian flag to paint or why we chose to work on the same painting together, but we did one more after this under the collective name, The Group of Two Cubists (and signed the painting G23 (with the 3 in superscript as in "cubed")). I don't know why we gave it that title; it doesn't refer to anything I can think of us thinking about. The foundation of my "stained glass" (or, as another friend, Ian Anderson, called it at the time, "Matrix" -because he actually thought that's what it was called, and this was eleven years before the movie of the same name) technique is evident here. I had
Post a Comment
Read more
More posts