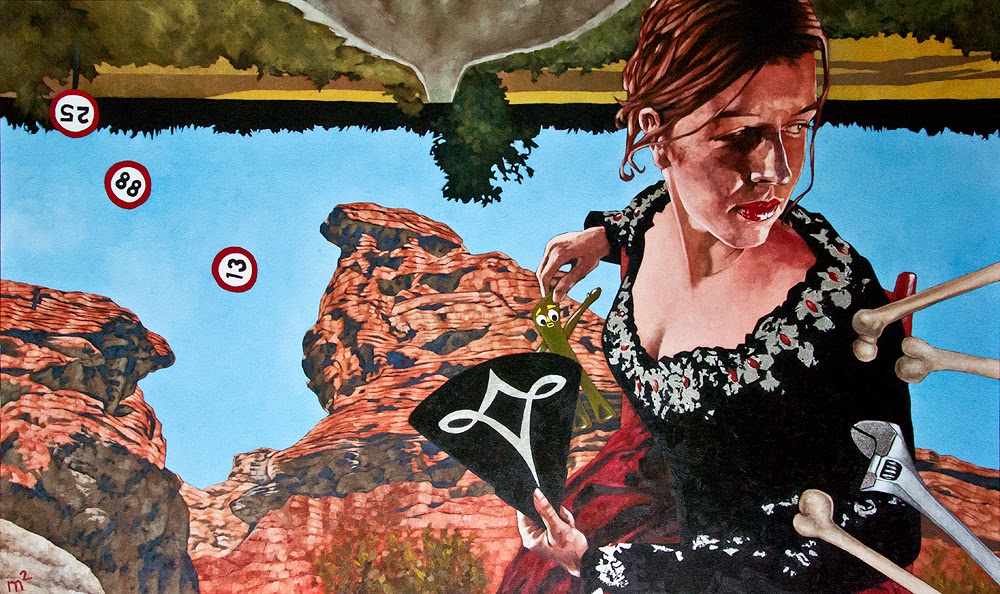 To finish up my celebration of the 25 years I've been painting, I wanted to paint a huge picture as the grand finale, featuring some elements referencing a few of my paintings from throughout that time. Gumby appears once again for the first time since my first watercolour back in 1988. The working title for this was BMF25 for a long time until I decided to just name it –rather straightforwardly– Silver Jubilee. And why not? 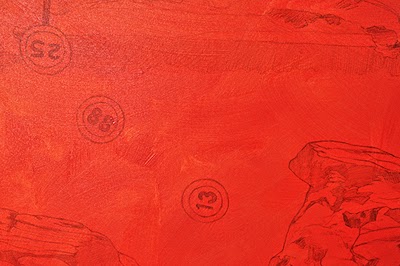 While writing the blog posts about my Silver Jubilee, I was concurrently working on this big thing and sharing sneak peeks through social media. Here, the pencils are done and a coat of orange acrylic has been applied. 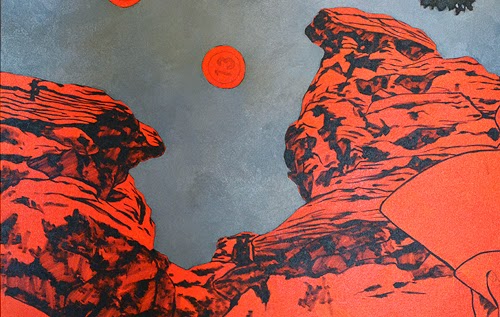 Blocking in the hoodoos.

You can barely see it but the finished tree means the upside-down Prince Edward County landscape appearing at the top is complete, as is the sky in a flat blue. I considered for a very long time whether I should detail the sky using the matrix motif I've used in so many paintings, but decided it'd look too cluttered, what with everything else going on in the composition. 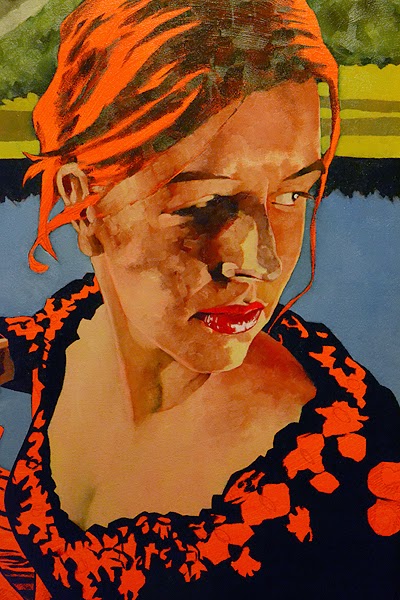 Ashley also appears once again, having been in close to 40 of my other paintings (watercolours, oils, and inks) and tons of drawings and sketches. Click on her name in the tags at the bottom of this post to see some of them. 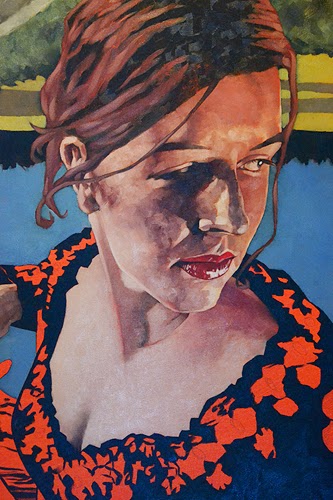 I'd painted Ashley wearing this dress from the opera Carmen a few times before (in the various media I mentioned above), the largest being this mural I did in 2010. It was while working on the jacket (just before starting the skin tones here) that I decided to make the usual gold areas (around the neckline and down the sleeves) silver instead, and that I should use actual silver for it...but more on that later. 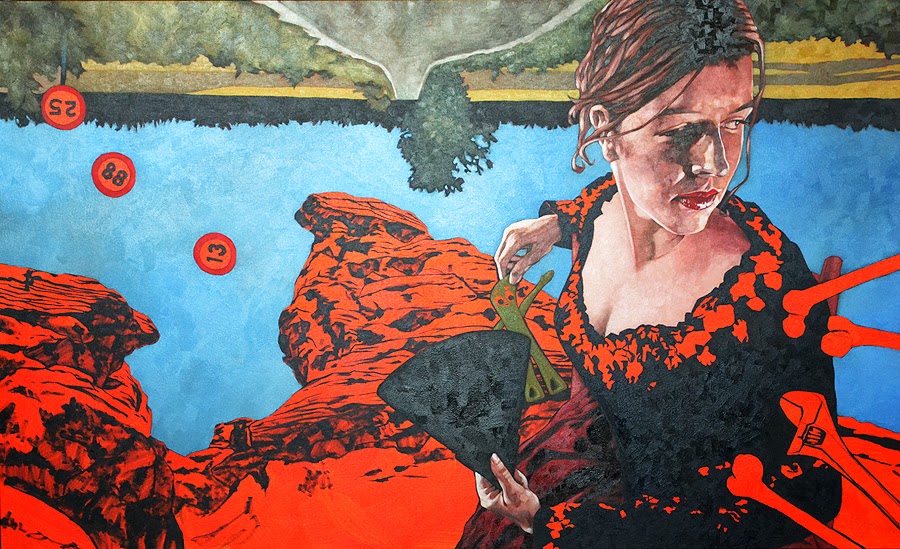 Still a ways to go.

It may look half done, but those rocks have lots of finicky details to render...and I still don't have my silver... 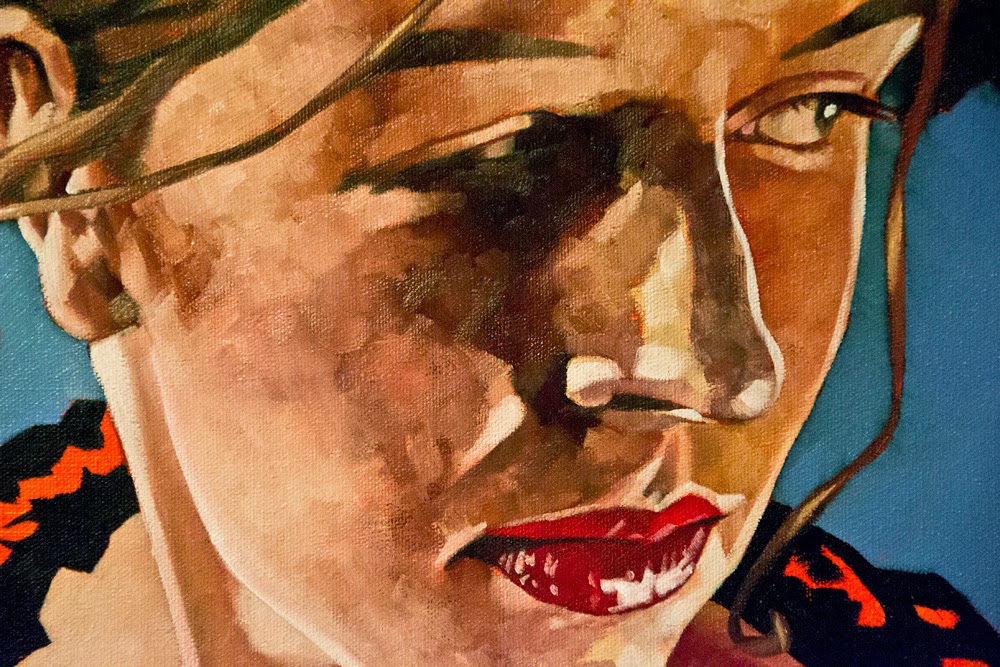 I like working large as it gives me lots of room to play around more freely. 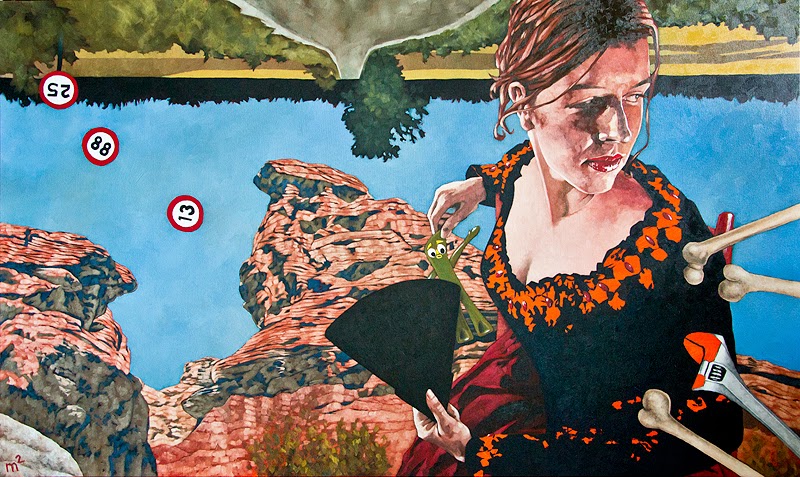 All those orange bits will be completed in genuine silver leaf...once I get around to ordering it...and once it finally arrives. I had intended to render the fan (see detail below), but decided instead to include the alchemical symbol for silver, and the fan (now flat black with no details) was the best place for it. 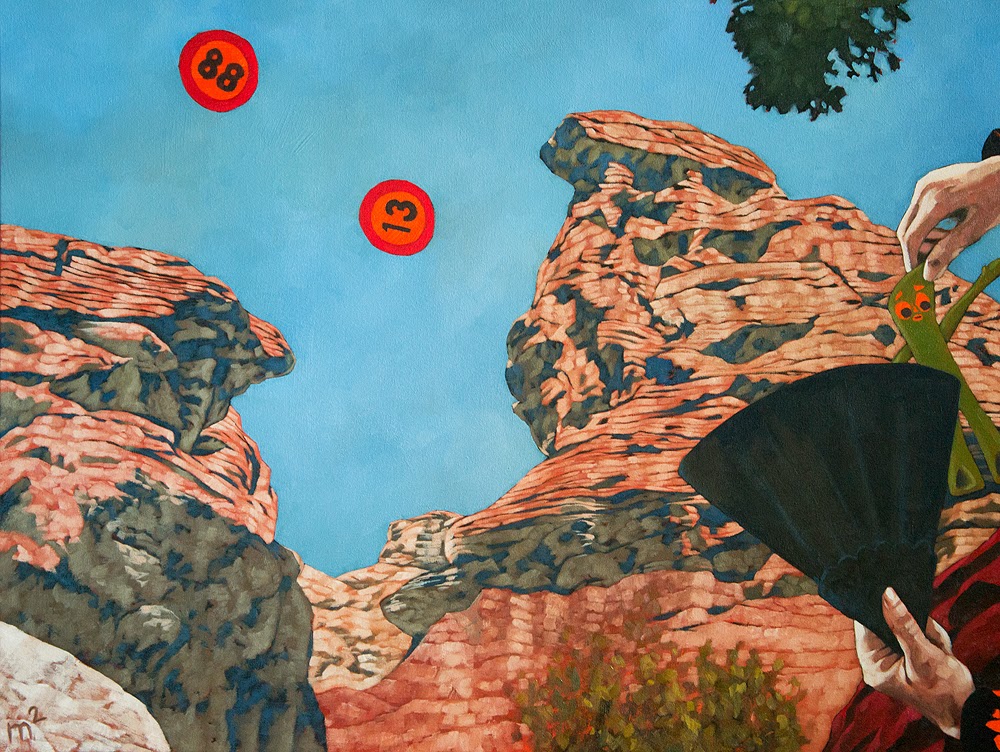 Based on photos I shot on a road trip back in 2005, I wanted to include something extra challenging and worthy of the large scale of the canvas...and a rocky landscape is certainly one way to go. 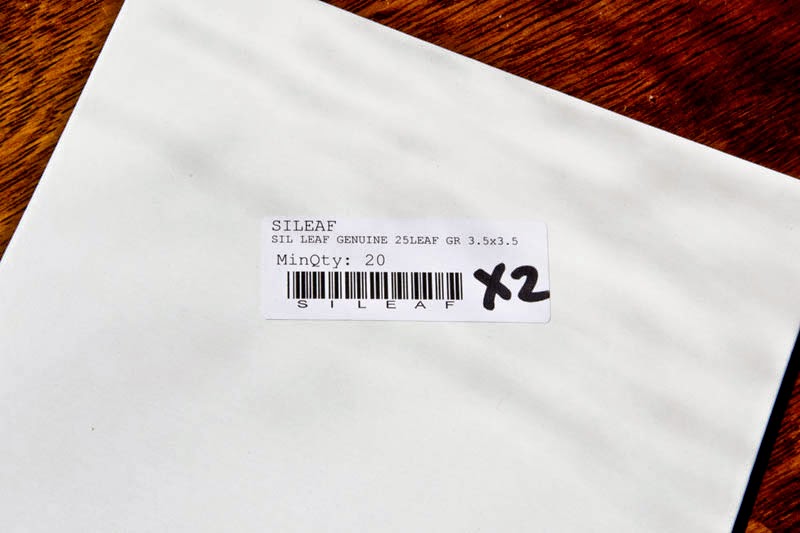 The main work on the painting was done in December 2013, but I didn't order the silver leaf until March 2014, and the packets didn't arrive until April, but that's okay: I may have started painting in November 1988, but I did way more watercolour paintings in 1989. 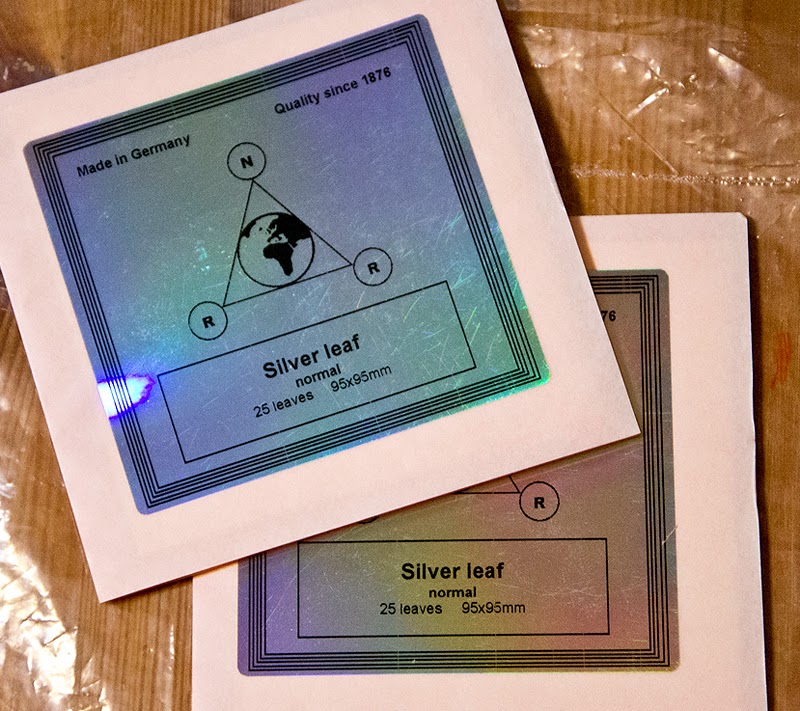 Having zero experience with gilding, I felt, just to be on the safe side, seeing as how it was sort of tricky to find, I should get two books of 25 leaves in case I messed things up horribly. Turns out I didn't even finish one book (but I still made a hell of a mess).

Some of the silver stuck to unwanted areas, so I eventually had to repaint the jacket to redefine the silver shapes and generally tighten things up a bit more. I also repainted the sky, making it lighter, more even, and less on the red side. 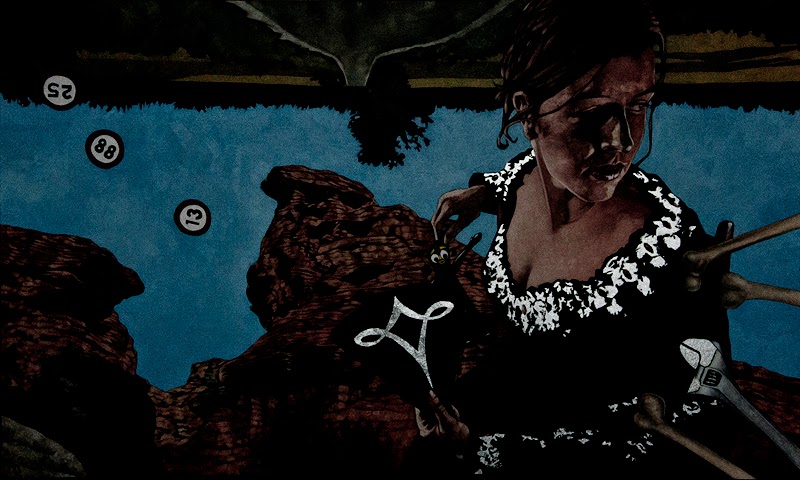 After the leafing and repainting, I noticed that, in low light, the silver looked kind of surreal and interesting as it reflected even the slighted light, looking like it was lit from within. I'm very happy with the way it turned out, the silver leaf being a big gamble.

That's it! I guess the next celebration will be my 30th Anniversary in November 2018 (I'll have just turned 47).

I've learned a great deal about painting (and myself!) in the past quarter century, and I look forward to learning still more during the next five years, documenting the adventure here (a blog I semi-reluctantly started six years ago).


Read about my 25th Anniversary celebration
from the beginning here:
Silver Jubilee: Part One 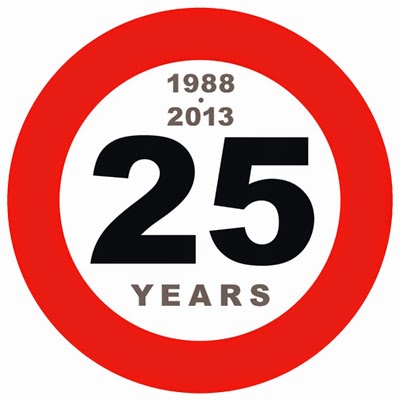