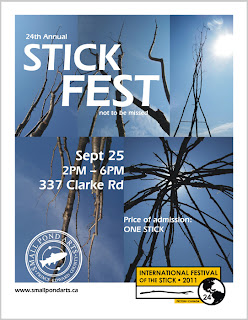 Stickfest is once again upon us and my poster for this year's event features an installation (in progress) by Mary MacDonald created initially for Cornography a few months ago. I took most of the photos before she started joining the ends (as seen in the bottom right) since the long branches (branches...sticks...c'mon, close enough) looked beautiful against the blue summer sky and I knew these would somehow form the basis of my poster this year. I did a bit of post-processing in Photoshop, then the design and layout was done in CorelDraw.

What an interesting three-day extravaganza the 2011 Prince Edward County Studio Tour was. There were lots of people walking in and out of my gallery here at Small Pond Arts, and I chatted amiably with interested folks, all while I worked on the underpainting of my next Prince Edward County barnscape. My large body of work (spanning just over two decades) seemed very well-liked by my visitors –including the six new paintings I did especially for the Tour using three local wines (Malbec, Cab Franc, and Baco Noir).

This whole time –from the initial application process last winter, until I took down my Studio Tour sign at the end of the Tour today– something was nagging at the back of my mind. Something about the whole Studio Tour's visual identity seemed oddly, and inappropriately, familiar...something about...my home town? Something about...an old TV show?

Equally bizarre: this is Post #200 yet it doesn't actually feature any of my own artwork.

Here are the last two of my six recent paintings created with wine (about 90%) and watercolour (about 10%). Some wines are hybrids, so why not my paintings?

When I asked Sherry Martin of Karlo Estates (in beautiful Prince Edward County) what their signature wine was and she replied "Malbec," I was surprised, expecting her to say their Van Alstine Port because it is absolutely amazing (but, then again, I would prefer to drink that Port rather than paint with it...). The vintage of the Malbec I used is 2008. 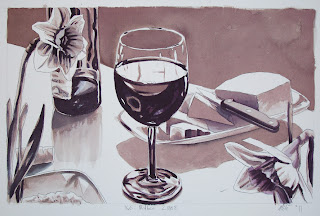 Both of these paintings (as well as two made with Cabernet Franc and two made with Baco Noir...and, of course, many of my other paintings) will be available for sale at the Small Pond Arts Gallery during the 2011 Prince Edward County Studio Tour. 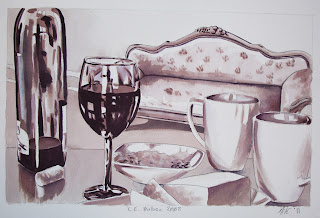 These are the next pair –of six– wine-themed paintings actually painted with wine which will be available for purchase at the Small Pond Arts Gallery during the 2011 Prince Edward County Studio Tour. This time the wine is a 2008 Cabernet Franc from Casa Dea Estates Winery in Prince Edward County, where I now live and work.

As I mentioned earlier, red wine alone cannot provide a tone dark enough for my tastes (I like having great contrast), so I had to supplement these wine paintings with a bit of watercolour (at a wine-to-watercolour ratio of about 9:1). 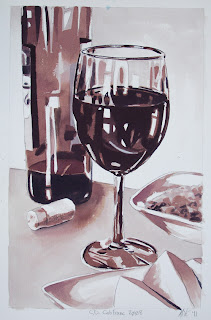 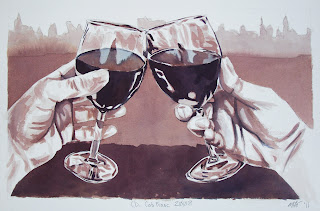 
These wine paintings are based on my own photographs and, not having a model on hand at the time, the one above is based on two separate shots of my own hands which I combined in Photoshop for reference.

About a year after my first experiment in painting with wine, I finally got around to a few actual full-scale paintings in this new medium (for me, anyway; there are many artists already painting in wine). For these new pictures, I chose three Prince Edward County wines: a 2008 Cabernet Franc from Casa Dea Estates Winery; a 2008 Malbec from Karlo Estates; and the 2007 Baco Noir from Sandbanks Estates Winery which I still had on hand since last year's trial. Incidentally, I used available light (as in the shot above) for all of my reference photos for these six paintings. 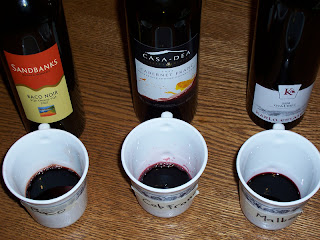 As previously noted, red wine can only get so dark and is unable to provide me with the extreme contrast I prefer to have in my paintings. To get a darker tone from the wine it needs to be reduced by heating it in a pot. Unfortunately, this concentrates the acids and keeps the wine from drying for an annoyingly long time. I got some advice from a physician to freeze some of the wine, remove the ice crystals (which would presumably contain these acids) and then reduce the remaining liquid. I did so and the reductions this time weren't as dark, but did dry in a timely manner.

Because they didn't get dark enough for my tastes, I had to supplement the paintings with watercolours (so they're ultimately, roughly, 90% wine, 10% w/c). 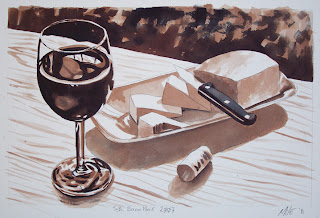 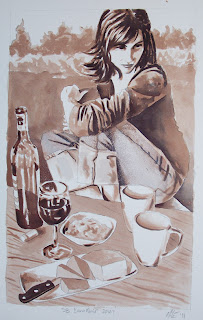 
Both of these paintings (and the other four) will be framed and available for purchase (among many of my other paintings) at the Small Pond Arts Gallery during this year's Prince Edward County Studio Tour.