Showing posts from May, 2012
Show all 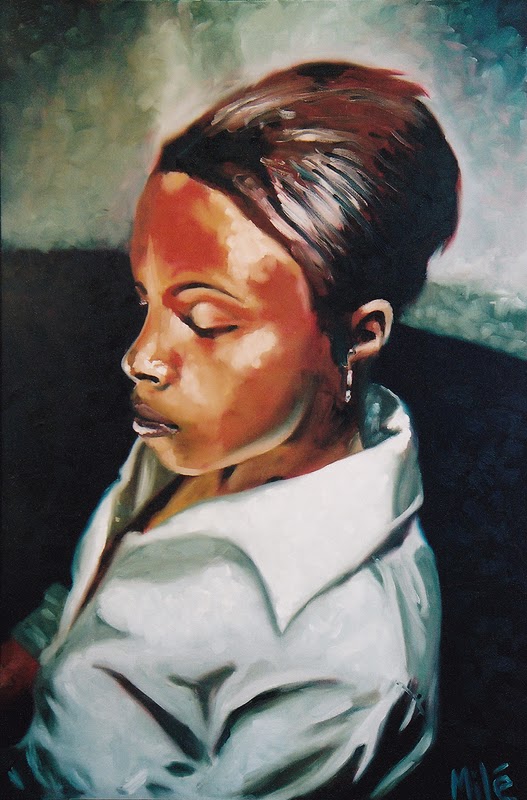 36" x 26", oil on canvas, 2005 I had never really considered this until just now as I'm writing this entry, that I can identify in this painting the beginnings of my current technique with oil paints –specifically, the sort of impressionistic texture in the background and in the dark areas that I now employ (with a little better control) in much of my recent work (see  this self portrait ). A few years earlier I painted what I considered to be a pretty good painting , but it was really only a prelude to this one. And so on.
Post a Comment
Read more 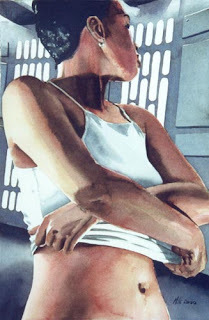 22" x 15", watercolour, 2000 35 years ago today, Star Wars was released and my life (such as it was at five years old) became forever enthralled by that film. My earliest exposure was through the toys and trading cards, and I didn't even see it in a theatre upon its original release. Over the years, though, I devoured any artwork associated with the Star Wars movies, specifically paying close attention to Ralph McQuarrie and Joe Johnston ; they didn't influence my work much (I don't draw or paint like them), but they inspired me as much as any of the artists I draw inspiration from...and in ways I probably still don't fully understand. Basically, I have to concur with Simon Pegg here: "It's pretty much impossible for me to quantify the full effect Star Wars had on my life. It inspired my imagination, developed my vocabulary, broadened my appreciation of music and my understanding of filmmaking. It gave me my first crush, my first real aspirat
Post a Comment
Read more 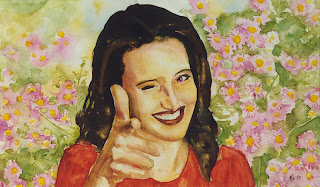 15" x 22", watercolour, 1997, private collection After a 15-painting run of local PEC barns (click on the "barnscapes" tag below to see them), I had a hankering to get back into some figurative work, and my next two big paintings fit the bill (one is half finished at "press time"). Going through much of the photo reference I've shot over the decades (hundreds of pictures!), I came across a few shots that I'd painted in watercolours and now would like to try and reinterpret in oils. The photo the above painting is based on (featuring my friend, Kimberley ) is one of them (mad sketching and Photoshop compositing are underway).
Post a Comment
Read more 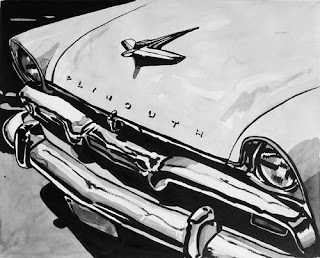 14" x 17", ink on paper, 2006 This is another amazing car I shot when I was living in Toronto, and was one I'd seen almost every day because it was just at the end of my Street on Concord Ave. I should do a colour version of this car (either from the photo this painting was based on, or one of the several others) because it was a lovely rosy pink.
Post a Comment
Read more 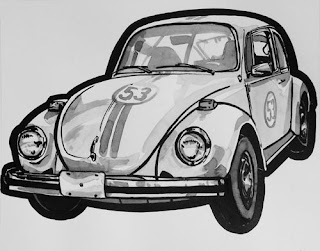 Bug Left , ink on paper, 14" x 17", 2006 Bug Right , ink on paper, 14" x 17", 2006 Although this Volkswagen Beetle was decked out like Herbie the Love Bug , I can't be sure it was used in any of the films in any way. I shot the reference for this while biking around Toronto a few years ago but my camera was loaded with black and white film ( C-41 , actually), but that was okay, since the car was largely monochromatic.
Post a Comment
Read more 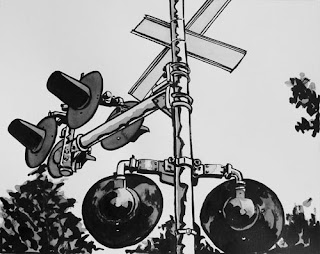 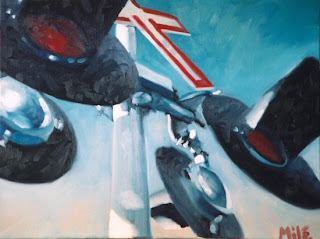 16" x 20", oil on canvas, 2005, private collection I don't have much to say about this painting except that I like railway crossings and that I should do a larger version of this (I've done a couple of ink ones ).
Post a Comment
Read more
More posts