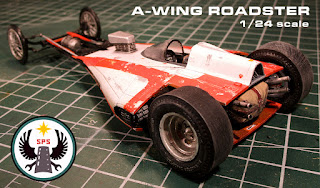 Things are moving along more quickly since Part 1 now that I'm finally using an airbrush. It's more precise and uses less paint than rattle cans, and I can use acrylics, which means less (if any) fumes and easy clean-up. I love it! 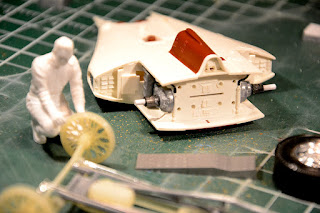 I settled my 1/48-or-1/72 scale problem when I realized the tires would be huge at those scales. I assembled a 1/24 scale Tamiya mechanic to see how he looked alongside the roadster and that was that (despite the Revell dragster/roadster donor kits (see part 1) being 1/25 scale). Also, here you can see I've added an extra beefy collar around the rod styrene axle. 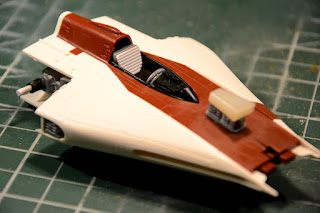 Now that she's 1/24 scale, I had to adjust the cockpit accordingly by scratch-building a seat from some leftover parts and some ridged sheet styrene. I should probably add some seat belts...but I doubt I will. 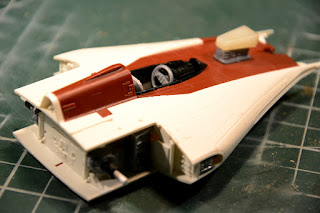 I'll be honest: that cockpit looks uncomfortably (if not unrealistically) cramped. That steering wheel is from the dragster donor kits (attached to the A-Wing kit's flight console), but good luck turning the damn thing without scraping your knuckles on the inside frame. Also, I hope the driver can see around that intake...

I like the guy with the wheel, but I had another guy whose arm I misplaced somehow...so he's going underneath the car. 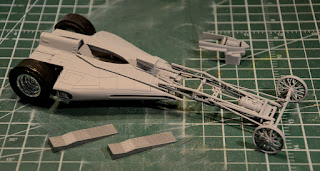 Here are all the parts primed with rattle can primer. I still think that chassis needs to be shortened a bit...

That's better (I'll figure out exactly how to attach it later). Oh, and I decided to add some extra parts from the A-Wing kit (the two bits of rod styrene were previously seen test-fitted in Part 1). 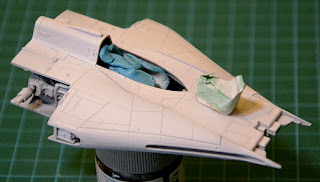 It looks grey, but it's actually white acrylic craft paint shot through the airbrush. I also have paints specifically formulated for airbrushing, but I'm learning how to thin craft paint as well and it's working out, so far. 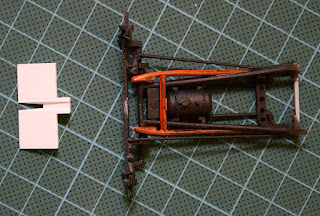 I missed out on priming the wing with the airbrush, so I used a paintbrush and it turned out okay –the white went on when I airbrushed the rest of the car. I used black primer for the chassis and most of it will remain black. The orange is going on in numerous light coats with a brush. 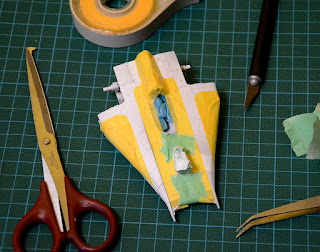 I played around with various paint schemes in Photoshop and decided on one that was suitably retro and Star Wars-y; primarily white and orange with a few nice curves. It's gotta be an association formed in my childhood, but orange and white scream 1970s sci-fi to me: 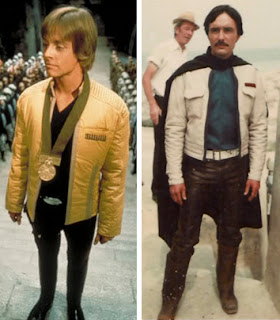 I planned for a bold black front but the intake scoop got in the way of that design. The black chassis makes up for it, though.

Masking the model was tricky as I'd never done anything this complex and I was a little worried the tape might peel the white paint off since I sprayed that with hairspray to ease in chipping later on. 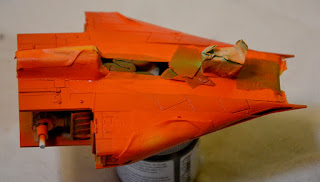 The colour is exactly what I want and it looks great right now...BUT will the tape wreck everything when it comes off? Was there any bleeding underneath the tape? Did I even mask everything properly?

The tape came off well and the markings turned out as good as I'd hoped. I rolled the wheels in place and brought the chassis in for a quick look-see at the roadster's current state. 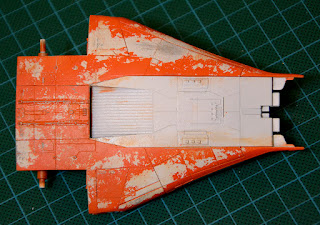 I'd done some salt chipping on my two fencing trucks, but this was my first time trying the famous hairspray technique, so I practiced on the underside to get the hang of it (plus, that would see the most wear, anyway). 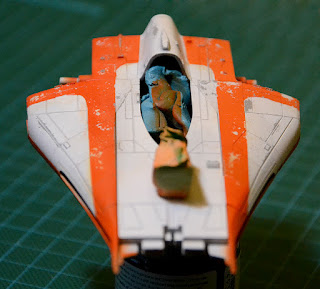 I used more restraint with my chipping on the top of the vehicle. I'll add some weathering like dust and grime later on. 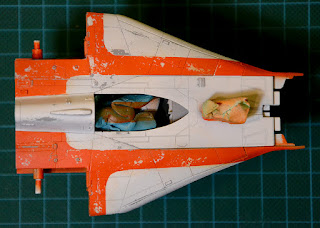 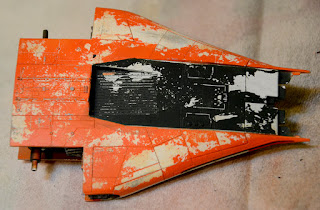 The heavy (perhaps overdone) chipping on the bottom of the vehicle will be partially hidden under some dust and other weathering...plus, it won't be seen clearly anyway, so I'm not worried about my heavy-handedness here. 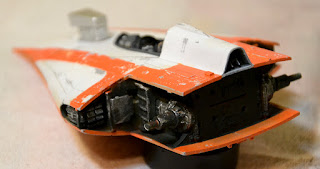 Airbrushed with some dark grey craft paint then dry-brushed with chrome silver. The parachute and eight exhaust pipes will go on that vertical surface. The silver on that hood intake needs a black wash...

The next post will deal with attaching all my parts to this fuselage (wheels, chassis, windshield, exhaust pipes, parachute), adding a few decals, and setting up the mechanics in a nice little vignette.

On to PART THREE. 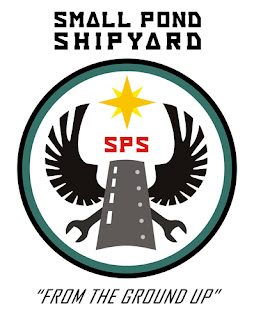 Christmas in the County 2017 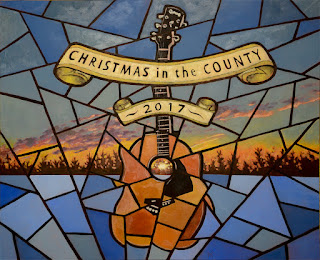 Being a huge fan of music, I always feel lucky and happy when I get to participate in the design and/or illustration of a CD package for a band (or other musical project). I've done a few of them over the years, learning a lot along the way, and they've been plenty of fun, for the most part.

A few months ago, Krista let me know that Lori Farrington, one of the organizers of the annual Christmas in the County fundraising album, was looking for an artist for the 2017 CD cover. I contacted Lori immediately about volunteering to illustrate the cover and offered to go beyond that and design the booklet as well. It turns out it's just a sleeve, but the track listing and credits still needed to be laid out on the back of it, so I took care of that...although, I don't know what the CD itself will look like, as I wasn't involved in that (somehow I let it slip my mind). 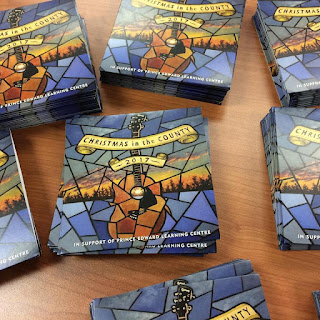 Some of my earliest ideas centered on coziness, inspired by the Danish concept of Hygge, but I couldn't figure out a way to illustrate that and customize it for Prince Edward County without it feeling overly contrived. I'm sure there's a way, but I wasn't happy with any of my ideas, so I brainstormed further, collecting images for inspiration.

Among these were images of stained glass windows (traditional and contemporary), various musical instruments, local winter landscapes (mostly pictures of Small Pond in winter), and the covers of past Christmas in the County CDs by other local artists (to make sure I don't repeat earlier ideas). 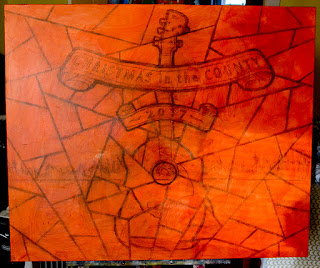 Skipping my sketchbook, I decided to compose my cover idea directly in Photoshop using a photo of a winter sunrise I shot a couple of years ago in our backyard, an acoustic guitar, some scrolls from a medieval stained glass window, and a scan of a "matrix" pattern (among many) I'd created a decade ago for use in some other paintings.

The scrolls would remain on top of everything, the landscape would remain intact (but I'd make the foreground a field of white snow, rather than the frosty tall grass from my photo), and I'd break up the guitar in a "shattered mirror" sort of way...for fun. 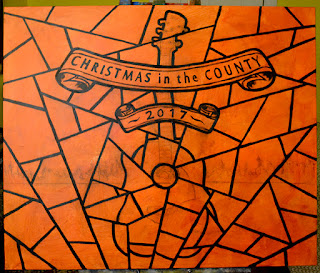 Getting the lead out.

Knowing this would be the darkest element, I started on the "leading" using a brown and blue mixture that I find gives me a richer black than black from a tube. This first application isn't the darkest it will be, but I planned to go over the lines at the very end to clean up any brush strokes that crossed over. 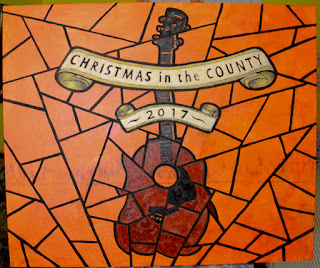 I started with the scrolls because hand-lettering is not one of my strengths and I wanted to get it done early in case I had to make any serious adjustments, but I think they turned out okay.

I made the guitar body darker than the final would be. knowing I'd paint several different lighter shades of brown and orange over top. 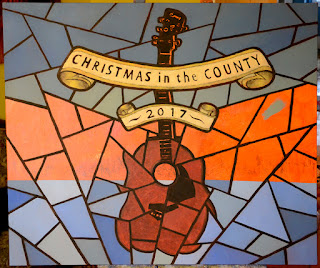 I painted the blue foreground expecting to either overlay that with some transparent white paint, or make a similar adjustment in Photoshop later on. Then I fell in love with the blue/orange complementary contrast overall and kept it as-is.

I didn't do anything to change the colour of the scrolls, here; that's just the exposure of the photo messing things up. 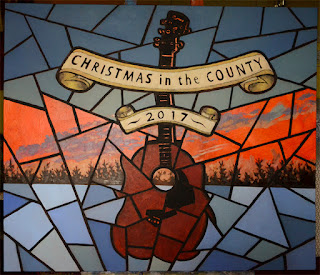 I've mentioned before how painting over a bright orange ground messes with my colour perception –especially if I'm painting blues– so getting the violet hues of those sunrise clouds was a challenge, but it worked out in the end.

After this stage, I had to simulate the brightness of the sun in the centre, so I added a red-orange halo around the trees in the middle and then made a bright yellow sun which would get a flat white covering afterward.