Showing posts from September, 2015
Show all

I've liked the design of the Y-Wing since I first saw it on Star Wars trading cards back in 1977 (true story: I didn't see Star Wars until years later; Empire was the first SW film I saw in theatres (twice)). I didn't exactly know why back then, but over the years I've felt increasingly that there's something classic about it; something timeless and somewhat obvious, yet still fresh and original (it's hard to explain...) so when I was getting back into modelling and saw Bandai's gorgeous kit of this ship, I knew I had to build one (this is a recurring theme). I saw a couple of video reviews of this kit online and they reinforced my need to build this ship. The one that clinched the deal was a comparison that showed how the new Bandai kit was a great improvement in detail and accuracy over the earlier Fine Molds kit (which was already quite nice). The ship, being a snap-together kit, came together rather quickly in just a few hours. I pain
Post a Comment
Read more 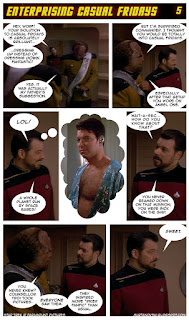 Not wanting to belabour the premise, I just figured Picard wouldn't object to Worf and Riker dressing formally on Fridays instead of dressing casually –such an ongoing conflict would become tedious, and I'm unable and unwilling to come up with a reason to continue Worf's silly storyline beyond this scene. I did, however, do one final strip set aboard Deep Space Nine, to see how they'd deal with the concept of Casual Fridays... Go boldly to PART SIX
Post a Comment
Read more 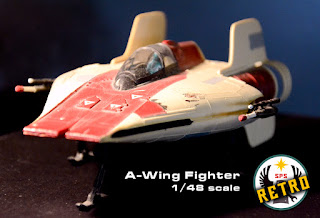 I mention in  this post  how I was fascinated with models since I was a very young boy in the mid-'70s, but I didn't get around to actually building any until the '90s. This A-Wing wasn't the first model I ever built, but it's the only early one (circa late 1993) that I've photographed, so far.  They're fairly easy to miss in  Return of the Jedi , but I collected the trading cards and magazines so I was keenly aware of this new and interesting ship (the new B-Wing was okay, but I preferred the compact, yet sporty, look of this one). In 1993 I was playing the  X-Wing video game  where you can fly and X-Wing, Y-Wing, and an A-Wing, and while I very much liked the other two ships (I just finished building a 1/72 scale Y-Wing, in fact), I was impressed with the speed and agility of  the mighty A-Wing .  One night I was out with friends and we stepped into a hobby shop and, as soon as I saw this MPC kit I knew I had to build one, so I bou
Post a Comment
Read more 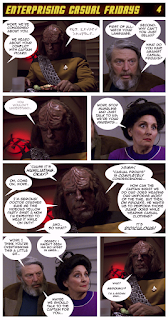 I had some fun portraying Worf behaving like an obstinate teenager in the presence of his adoptive parents. Sergey's advice is actually my own solution to Casual Fridays (recounted in my post for  ECF #1 ). Go boldly to PART FIVE
Post a Comment
Read more

I figured of all the bridge crew, Lt. Worf would be most resistant to Casual Fridays, and, therefore, be my stand-in to express my own feelings about the concept ( tediously comprehensively detailed in ECF #1 ). I didn't feel any need to do anything with Troi because I figured she was *always* in casual mode (until toward the end of the series). Apologies for my inconsistent use of the capital I all over the place. Go boldly to PART FOUR
Post a Comment
Read more 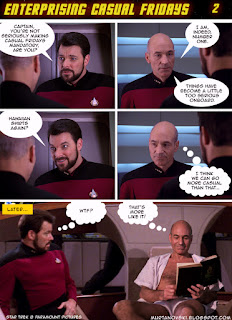 In Enterprising Casual Fridays #1 I established a new custom onboard James T. Kirk's Enterprise as well as Jean-Luc Picard's Enterprise-D, but there was no story, just a silly non sequitur based on a somewhat flimsy concept. The "story" (such as it is) really begins here. Go boldly to PART THREE
Post a Comment
Read more
More posts