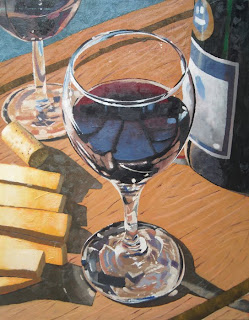 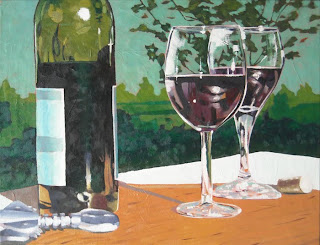 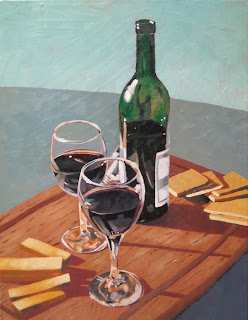 Here's a closer look at the three new paintings I did specifically for the Artevino show last Saturday.

I set up a bunch of these still lifes (lives?) back in May with the intent of having at least three small wine-related paintings ready for the Artevino show. The challenge was to find the time to paint them as well as having sufficient time for them to be dry for the show.

It all worked out and (a) and (c) are still available for purchase at my Etsy shop:
Full-bodied (a)
Full-bodied (c) 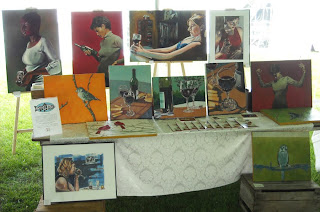 Yesterday was the big Artevino show at the Crystal Palace in Picton (I was in the Terroir event there just a few weeks ago). My set-up was in one of the giant tents, hence the blown-out background in that photo. It rained a wee bit, but since they attached the walls, all of us stayed dry. I would have preferred to be inside the Crystal Palace itself.

But, then again, if I were, I may not have met Peter Paylor. While Krista and I were setting up my stuff, we noticed that directly across from us was a sculptor whose work we admired since seeing some of it in a gallery a few months ago in Belleville. We went over to chat a few times and eventually bought two of Peter's pieces (one for a friend) before the show even began. 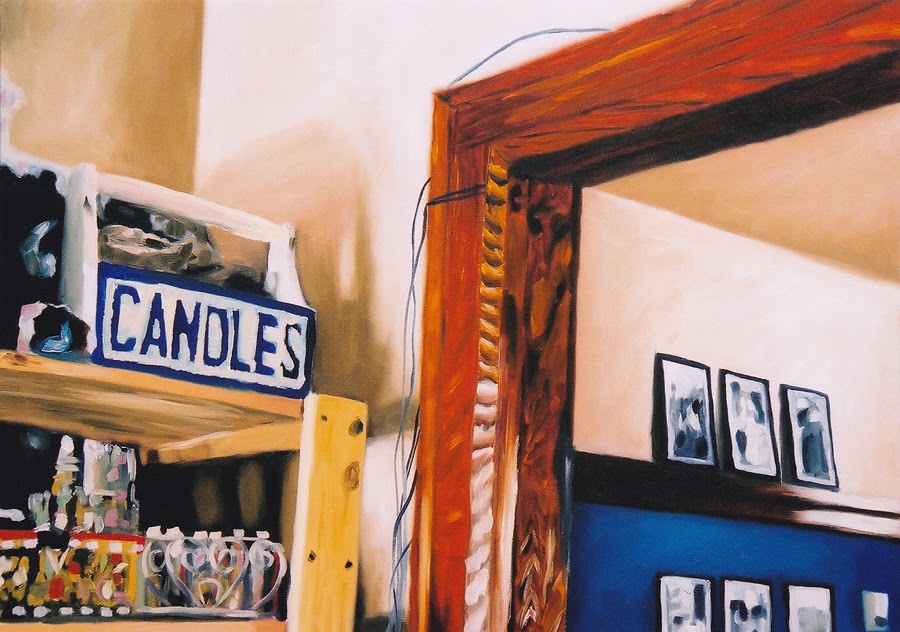 Here's the painting that's in the background of this painting from my previous post. The photo ref for this (and my other Interiors paintings of this house) was shot some time in the year 2000, I think. 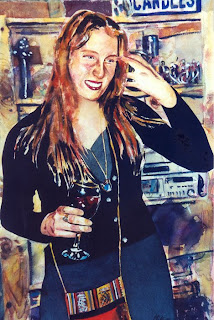 As I prepare for the upcoming Artevino on 19 June, I've decided to post another wine-related painting.

I shot the reference for this during a New Year's Eve party (2001/2002) at the same house where I shot the ref for my Interiors series. In fact, I did an oil painting with the shelf that's behind Jill (I never did get her last name).

Technically, I was trying hard to loosen up with this one, but I couldn't help maintaining control for the face and the hand that's holding the wine glass (I love doing reflections on glass). Her top and skirt are both flat colours (indigo, if I remember correctly) which serves to contrast against the looseness of the background and the relative tightness of the figure. I tried to get a certain Jon J. Muth quality in her hair (I love how he paints redheads), but I'm not sure how successful I was. 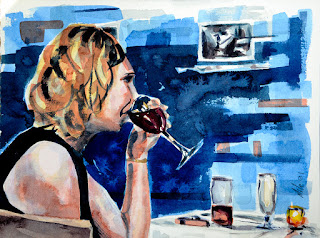 As mentioned in my previous post, this painting was one of four works I had in last weekend's Terroir at the Crystal Palace in Picton.

The reference for this was shot on one of my many outings to Toronto's Reservoir Lounge to see some great live music --mostly swing and such-- back in the late 1990s. I'd planned to do a series from this venue (hence the "01" in the title), including some shots of the various musicians, but I only ever did one other painting --and it wasn't so great, so you may never see it here.

The paper I used was very smooth, so the paint soaks in very quickly, making blending a challenge. This forced me to work slightly differently, as evidenced by the rectangular strokes and various unblended areas. 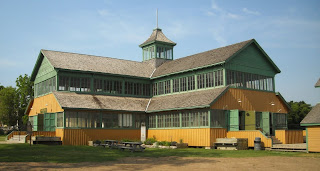 Apparently, terroir is not French for "fear of wine" but, according to this site: "A 'terroir' is a group of vineyards (or even vines) from the same region, belonging to a specific appellation, and sharing the same type of soil, weather conditions, grapes and wine making savoir-faire, which contribute to give its specific personality to the wine."

Last Saturday at the Crystal Palace in Picton, the Prince Edward County Winegrowers Association hosted the 2010 Terroir: a celebration of new spring wines --and though the posters for the event simply promised "wine, music, and local cuisine," there was also artwork by several local artists displayed, including some of mine. The works dwarfed by the artist

Here I am with the four pieces I brought to this year's Terroir: (clockwise from top left) Reservoir Lounge 01, Red Wine (Coke 4), Red Wine (Coke 5), and Je Pense. I picked some wine-related paintings (which, by strange coincidence, were all done in 2001) in the spirit of the festivities. New wine-related paintings are currently underway now that my studio space is ready for action. 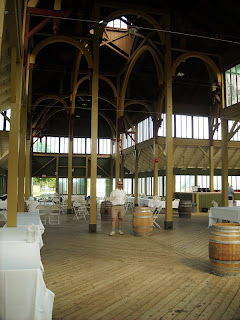 The artist dwarfed by the venue

The Crystal Palace is a very cool historic building but I didn't get to see it full of wine, music, and local cuisine as I had some recently-sold paintings to ship, so it was just load-in and load-out for me and Krista and my paintings.

Next wine-related art extravaganza at the Crystal Palace: Arte Vino on 19 June --another integration of wine, art, and food.