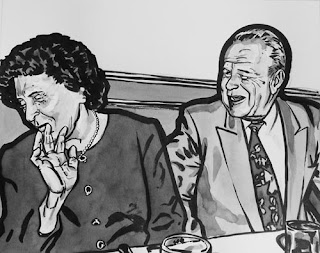 I'm in the midst of working on fifteen twelve portraits for a show this summer and I was thinking about posed portraits vs candid portraits. Once again, I'm working from my own photo ref for the new series, but all of the shots are more or less posed-for (unpredictable animal companions notwithstanding).

About a decade ago, I was pretty keen on taking my trusty point-and-shoot film camera with me to social events and family get-togethers and trying to shoot candid pictures by reaching out my arm and roughly aiming the camera at the desired subjects. This was one of those cameras that didn't take a second to auto-focus, so the picture snapping was instantaneous. Unfortunately, since the aim was only accurate less than half of the time, most of the pictures shot this way leave out too much of the desired subject or are just plain useless, leaving me with tons of garbage prints.

Sometimes I get pure gold.

This painting is based on a photo of my aunt Magda and uncle Kiro (taken at one of the dozens of Christenings that seemed to be happening every month back at the turn of the century). It captures a beautifully perfect illustration of their relationship: Kiro may have just cracked a joke that Magda thinks isn't too funny ("Ah, come on...") --but she's smiling, indicating that, yeah, it is funny. They're always gently ribbing each other (as our whole family does), but I feel this also shows a loving aspect as well (but maybe that's because I know them so well).

I honestly don't remember what was actually said when I snapped the photo, but when I developed the roll and saw this, I felt it was worth a hundred dud pics. I think this portrait of my aunt and uncle is a thousand times better than anything I could capture if I had posed them.
It's also a great likeness of the two. 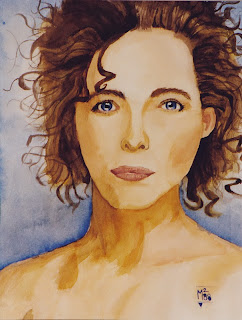 
At some point in the winter of 1988 I decided to challenge myself by painting a portrait. After completing my first three, largely abstract, explorations into watercolour (this, this, and this), I thought something more recognizable would be fun to try. I don't remember why I chose Michelle Pfeiffer for it because, then, as now, I think she's a fine actor, but I feel kind of indifferent about her. Maybe it was Tony's suggestion...

You'll notice first that the likeness is barely there, if at all. The hair is all over the place (I deliberately exaggerated what I saw in the photo). The skin colouration is weird, but I do like the transparent glazing effect evident all over her --something I remember not being able to replicate in the next few paintings I did. This is obviously student-level work (I was, after all, just 17 when I painted this).

A couple of years ago, I thought I'd track down the original photo ref I used (or find  the original photo online) and make a new painting of her at my current skill-level --just for fun, in the interest of comparison. Maybe one day... 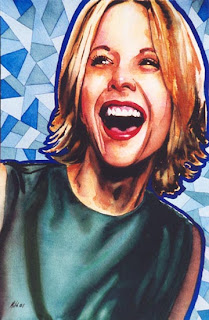 For now we'll have to settle for my portrait of Meg Ryan above for comparison (mind you, this painting is now almost 11 years old --and, incidentally, regarding the actors, I feel about Meg the same way I feel about Michelle, that is, largely ambivalent). I definitely got better at likenesses in the 13 years (and dozens of paintings) between these two paintings, and certainly my watercolour skills improved as well. The glazing and blending in the skin (and hair, especially) is more sophisticated, there's an attempt at evoking the smooth fabric texture in her top through the blending, there's a stronger level of contrast and design overall, and, yes, that's once again a matrix background --which I started using in 1988.
Both of these paintings were done using magazine photo reference.

I bring up these two celebrity portraits because I'm currently working on a massive 15-painting 12-painting portrait series (in oils; based on my own photo ref of local farmers) and I thought it'd be fun to share some more older work and show a bit of my progression as a portraitist and watercolourist. 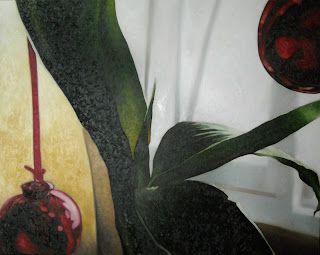 I guess, technically, the date above should read "2001-2010" since I started the thing about nine years ago, worked on it a tiny bit a few years ago, and only finished it a few weeks ago. What I abandoned some time in 2001 was just the rough underpainting...and some minor touch-ups and textures were added a few years ago. There was still about 90% left to paint. In fact, there are still white highlights I need to add to complete the painting, so, technically, it's still not finished and I should really put "2001-2011" as the dates...

This is a close-up of the window in this painting and also this painting. I translated the titles for that Interiors series into rudimentary French because I felt naming them based on the subject in the picture to be too banal in English, and they might sound better, more interesting, and maybe even exotic in French. For some reason, rather than translating this one into French, I used the working title "Brollies" (despite no umbrellas appearing anywhere in this painting) when mentioning this on Facebook or Twitter. And yet the official title is a banal English itemization of the subjects in the picture. Such is my whim.

Also, quite whimsically, I chose to have as accompaniment during my painting of Brollies all the time travel movies I own. And I chose to watch them in reverse chronological order of their release. Here is the list and the order in which I watched them:

I find I'm using a #4 brush more and more these days and I used this one on Brollies for everything in the painting except for the white window areas: 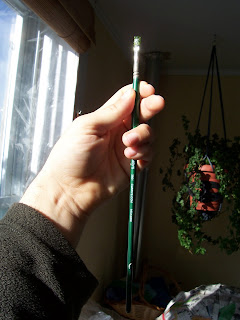 I find it comfortable to use a small brush like this for tiny areas of subtle, almost impressionistic, colour mixing.
Am I crazy to use such a small brush for such a large painting? Quite possibly. Here's the painting in my kitchen, shown for scale: 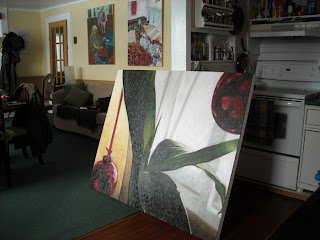 This painting will be for sale at my Etsy shop soon. It's still wet (and did I mention slightly unfinished?) and wouldn't ship well in such a condition. I'll provide a better photo of the painting then, too, I promise.