Showing posts from October, 2014
Show all

The Theatre of War 20" x 16", oil on wood panel, 2014 Deep in the "Calamity" section of my World War One painting project, To the Sound of Trumpets , this one is sort of linked to two other paintings : Sometimes I Feel Like Going Home and Sometimes We Feel Like Going Home , with this being the third (or first) in a sequence.
Post a Comment
Read more 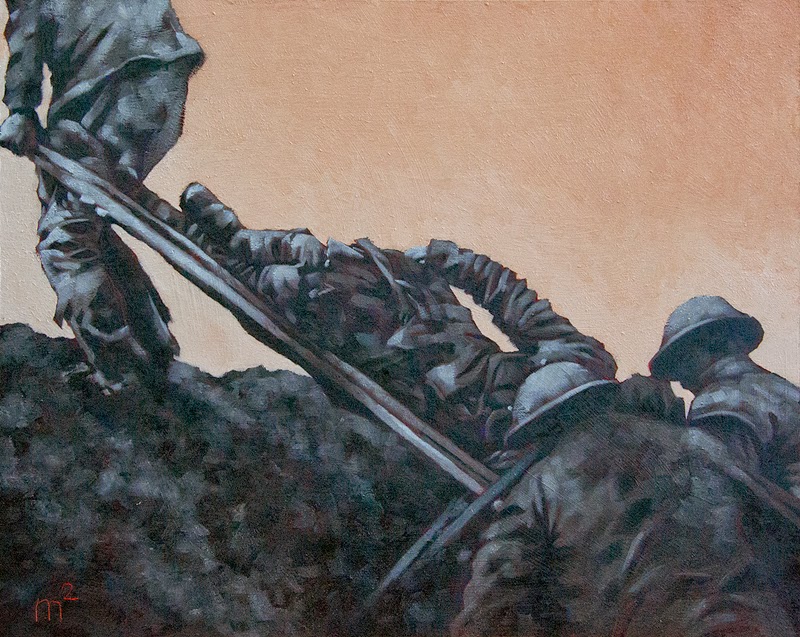 16" x 20", oil on wood panel, 2014 This one's another in the huge "Calamity" section of my WWI art project, To the Sound of Trumpets . You can see this painting (and seven others) in person in the window of the awesome bookshop we've got here in Picton called Books & Company . There are three others in the Wounded series. Of all the terrible things that happen in war (and this one in particular), the thing that always strikes me hardest is the sheer volume of people killed and wounded: "The total num ber of  military  and  civilian casualties  in  World War I  was over 37 million. There were over 16 million deaths and 20 million wounded ranking it among the  deadliest conflicts  in human history." –source: Wikipedia (click the Wiki link for a comprehensive breakdown) Therefore, I chose to focus on the personal costs of fighting any war rather than the purpose for it or any triumphs that may come of it. In fact, one of my proposed
Post a Comment
Read more 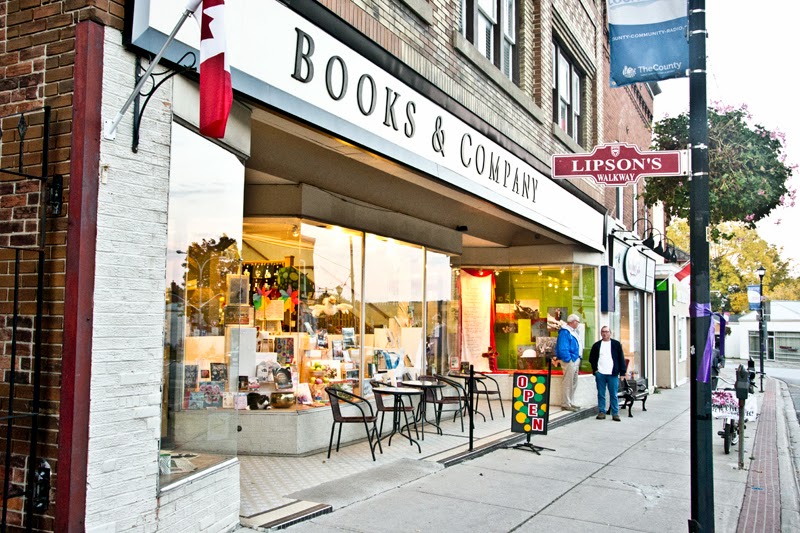 If you're in Picton from now until November 10 or so, you can see eight of my paintings from my World War One art project, To the Sound of Trumpets , in one of the windows of Books & Company on Main Street. Isabelle did a great job on the display, making the paintings appear to be floating in space. The paintings seen here are, clockwise spiral from top left: Asleep in a Foreign Soil ; Wounded 2 ; Dance Masks ; War Progression #2; Bang Bang ; "Why Are We Here?" ; The Theatre of War ; and Writing Between the Fighting . And look! Here's a little bonus:
Post a Comment
Read more 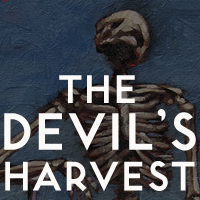 START : Saturday 18 October at 8pm END : Sunday 19 October at 9pm watch the reaping take place here ____________________________ My big War Project, To the Sound of Trumpets , is broken down into five sections, Dance Partners , Calamity , The War at Home , The Devil's Harvest , and Remembrance . For The Devil's Harvest I'll be painting 24 ink portraits in 24 consecutive hours of 24 soldiers from Prince Edward County. Like my previous ink painting marathons, 2012's Burning the Midnight Oil , and 2013's County 101 , I'll be streaming the event live on its own Ustream channel for all to see. It'll be silent (video only) because I tend to watch movies and TV shows during these things and I don't want any copyright issues to deal with –also, I hear people like to have their own audio playing while watching, anyway. Unlike those previous two marathons, there will be no puppet breaks and, obviously, this one will just be 24 hours long. I though
Post a Comment
Read more

Under the Same Sun 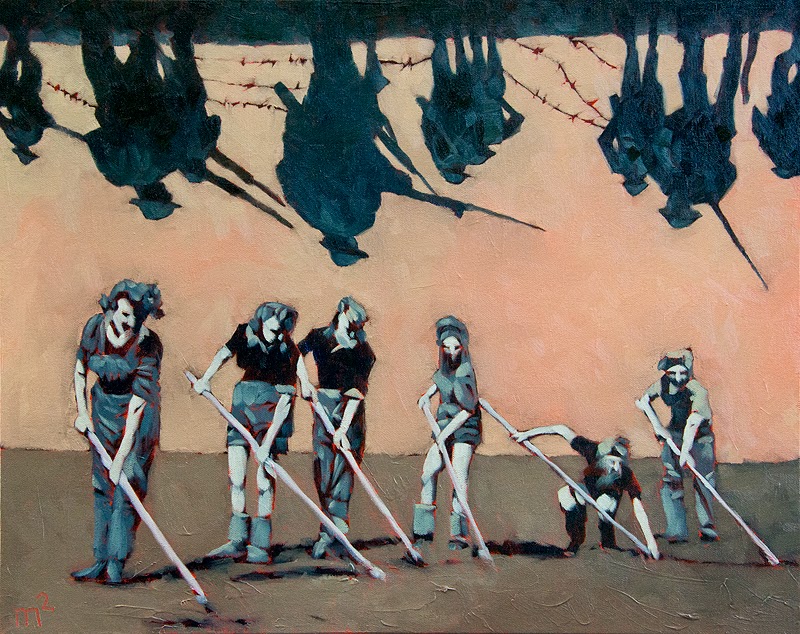 16" x 20", oil on canvas, 2014 Here in Prince Edward County there weren't enough women to fill the spaces left by the men who went off to fight (more and more as the war progressed); many women from Toronto and nearby regions had to be brought in to help out. A world away, but under the same sun, Canadian women and men took to the fields... This is part of the section called The War at Home in my World War One painting project, To the Sound of Trumpets .
Post a Comment
Read more 20" x 24", oil on wood panel, 2014 As this project was in its early stages I wrote down a couple dozen possible titles for it, waiting to see how it shaped up before finally deciding on To the Sound of Trumpets . "Mars" appears in two separate titles:  Mars on the Horizon , suggesting the oncoming war (borrowing a snippet of a lyric from "Red Lenses" by Rush); and Mars Needs Men , suggesting the god of war's voracious appetite for combatants (upturning the title of a 1960s sci-fi b-movie ). The first one might still inspire a painting, but the second one morphed into Children of Mars ...but I'm not sure the resultant painting is entirely successful, conceptually. There are three sides to every story and World War One was the biggest story of the 20th Century (until its very own sequel); grim, exhausting, complicated, full of propaganda, broken promises, innocence lost, and so much death. So we have the Good Guys and the Bad Guys (depending on
Post a Comment
Read more 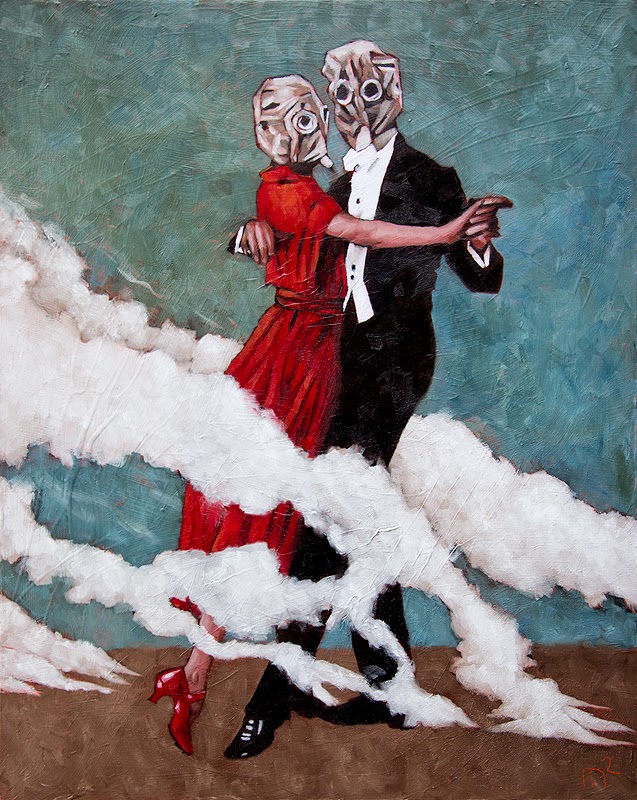 20" x 16", oil on wood panel, 2014, private collection With my current  World War One project I'm now slowly developing some more conceptual pieces, moving into metaphor, allegory, and other weirdness, expressing my own opinions, thoughts and feelings. This is an art project, after all, and not a book report. This painting references chemical warfare, and its large and particularly nasty role in WWI. Read about the horrors here . This painting also references a nightmare I've had since childhood... I was probably eight or nine years old (but I can't be sure at all) and I was watching whatever kids' program on television I would have been watching normally at that time, when a commercial came on for one of those compilation records (featuring the greatest hits of this musician or that), and this one was for 1940s-era big band music. Fine. No problem. But among the black and white film clips of the era (big bands, people dancing, having fun, enjoyin
Post a Comment
Read more
More posts