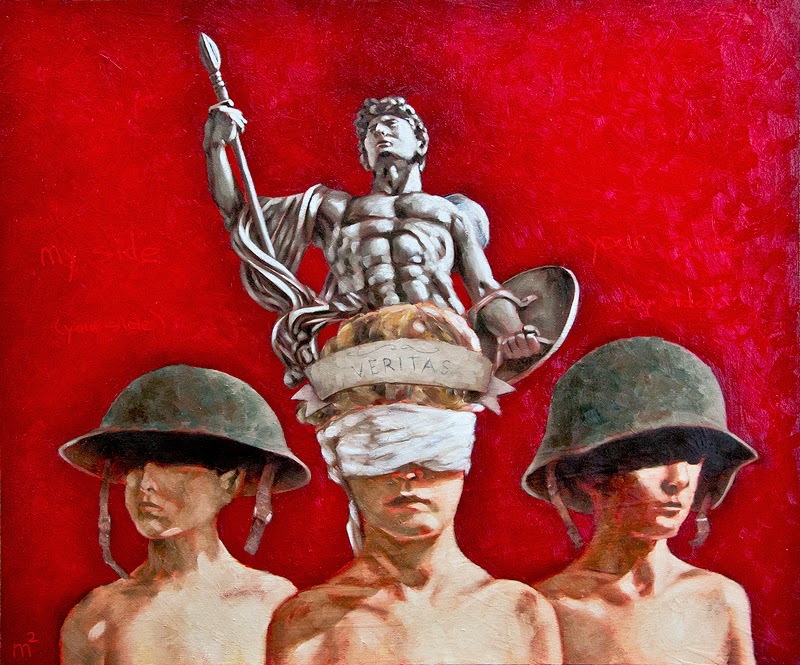 As this project was in its early stages I wrote down a couple dozen possible titles for it, waiting to see how it shaped up before finally deciding on To the Sound of Trumpets. "Mars" appears in two separate titles: Mars on the Horizon, suggesting the oncoming war (borrowing a snippet of a lyric from "Red Lenses" by Rush); and Mars Needs Men, suggesting the god of war's voracious appetite for combatants (upturning the title of a 1960s sci-fi b-movie). The first one might still inspire a painting, but the second one morphed into Children of Mars...but I'm not sure the resultant painting is entirely successful, conceptually.

There are three sides to every story and World War One was the biggest story of the 20th Century (until its very own sequel); grim, exhausting, complicated, full of propaganda, broken promises, innocence lost, and so much death. So we have the Good Guys and the Bad Guys (depending on which side you're on) flanking blind Truth, all three naked and vulnerable, young and innocent, presided over by an ancient but not obsolete god of war.

A sidenote: While photographing the boy as the model for the three forefigures ("Mars," himself, is based on a statue I shot in Rome last March), I came up with an idea for another painting, Bang Bang, which is much, much less of a muchness.