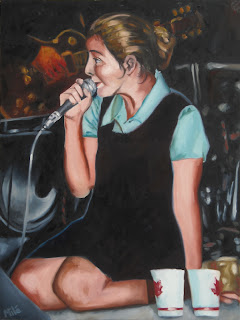 With the opening of my Field to Canvas show of local farmers portraits just over a month away, and since I'll be previewing that show during all of May with details and in-production images, I thought I'd wrap up April with the last full-image painting you'll see here until June.

This portrait is of Elaine Secord, lead singer of Squirm, a five-piece Toronto band that played the clubs in the '90s and recorded one CD (for which I created the artwork) before disbanding by the year 2000 or thereabouts. I used to see them perform a lot; we were friends, but I also thought they were quite good and enjoyed each show (no matter how smoky the venue).

I planned to paint more rock 'n' roll pictures with Squirm as my subjects, but I never got around to that. However, I took dozens of photos for the CD and decided to use many of the shots of Elaine in a whole bunch of paintings (like this one) and possibly more to come.

This painting's made up of two photos: one of Elaine, and a separate one of Tim Martin, guitarist, which adds much-needed interest (and rock 'n' roll ambiance) in the background.
Also of note: this is among my first figurative works in oil made right after my Interiors series and you can see that I'm still figuring out the medium. 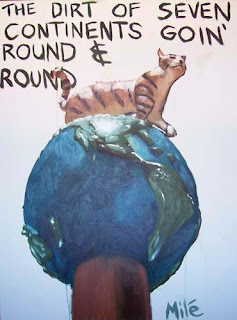 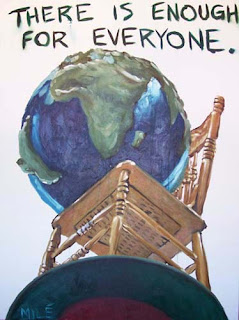 I did these two paintings live in front of an audience while my friends (in their band at the time, Uncle Seth) played raucous rock music. It was part of a regular event in Kensington Market in Toronto called Pedestrian Sundays, where various streets in the neighbourhood are closed to cars so people can walk, bike, dance, skip, and/or frolic about freely (click that link for much more info).

So my friends set up their gear on the sidewalk underneath Krista's then-apartment above the then-egg-shop on Augusta Ave. and I set up my gear just off to the side. I roughed-in the pencils for these paintings beforehand so I would have some kind of guide and then went at it with the paints while the band played and people watched. It was a lot of fun. 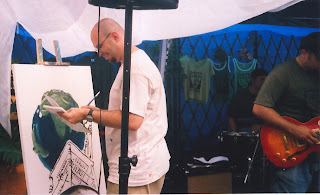 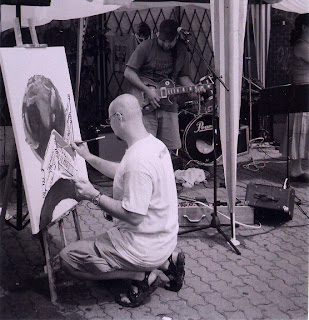 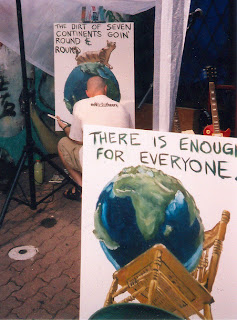 My inspiration for these "live paintings" was the master of live painting, Denny Dent, and I hope to one day try his fantastic approach. As it was, my own live paintings were quite controlled...but still very fun, especially with the loud music right next to me, urging me on. Did I mention that it was a lot of fun?

Being Pedestrian Sunday, I wanted my paintings to reflect my interest in and concern for the global environment, so I chose two images based on sculptures from the Kensington neighbourhood that featured globes (there are other such sculptures decorating Kensington, but these two were the most appropriate).

In keeping with the theme of environmental concern, these two canvases were eventually reused and now are host to two new and different images (but I don't know which new paintings they became).

PS: Yes, Krista and I stencilled a bunch of "David Suzuki for PM" shirts and sold out that weekend. 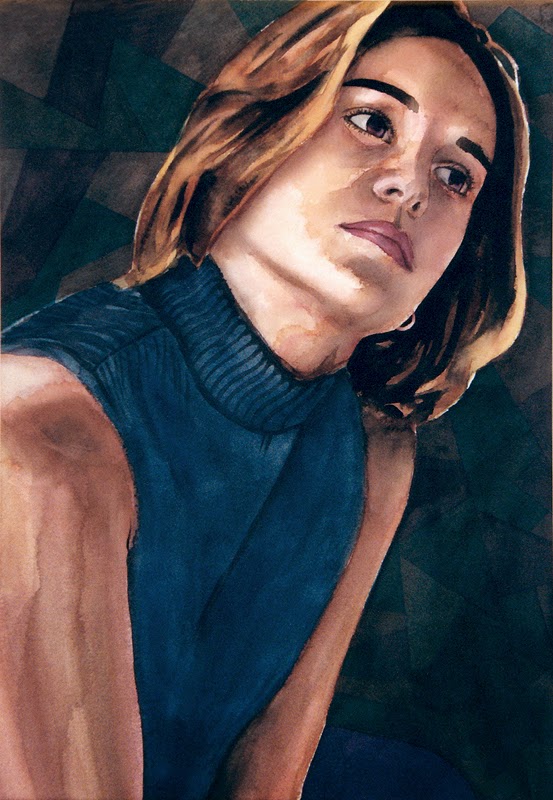 This was painting number 52 during the year that I forced myself to paint one picture per week (previously mentioned here). With it, I had reached a milestone in my practicepracticepractice project --which I ominously named "Operation: Waterstorm," to help instill in me a sort of military-like discipline to achieve my goal. I reached #52 early (some time in the fall, I think) and had time (and energy) for eleven more for a total of 63 paintings in 1998 (all watercolour; I had yet to explore oils).
[type in 1998 in the search box waay in the top left and peruse many of my paintings from that year]

I noticed over the course of the year that my skills were gradually improving. Not every painting was a gem, and there were some even in the later weeks that were not so hot (or had areas of not-so-hotness), but, overall, practicing watercolours day after day for a year taught me a lot about the medium and a lot about myself.
The main thing it taught me was that I did not have a gift and I was not lucky; if I wanted to be a good watercolourist, I had to paint and paint and paint. Whatever "talent" I had was most likely determination, commitment, passion for the medium, and lots of patience (watercolours demand patience).
Watercolours are hard. But I love them.

Note: this is the same model (wearing the same top) as the one in the previous post below.
Also note: subtle matrix background.

Another milestone of sorts:
I started this blog three years ago yesterday with a post about my Dad.