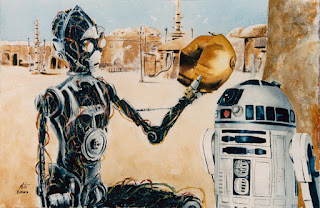 The idea for this one comes from a trading card for The Empire Strikes Back (one of my favourite movies) where Chewbacca is holding C-3PO's head while in his cell on Cloud City. The caption for the card read, "Alas, poor Threepio." I think that even as a child of about eight or nine I somehow knew this was a Shakespeare reference (but not necessarily which play).

That card struck me as actually being pretty clever and the grave digger scene concept stuck with me in the back of my mind for decades until The Phantom Menace came out in 1999 and showed us a C-3PO without his golden coverings. I love the design of the stripped-down droid and thought I'd reference Hamlet like the trading card while foreshadowing Chewie holding the head in Empire AND make it seem like Threepio's looking at the golden head with longing. Sympathy for the droid.

Of course, I had to add his trusty counterpart R2-D2 to the composition.

I situated the scene on Tatooine because Episode 1 establishes certain things about Threepio's origins (but I don't want to get into that here).