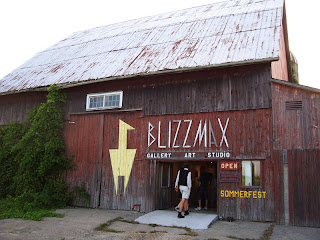 When I was invited to participate in the Sommerfest group show at the Blizzmax gallery by Peter and Alice Mennacher about a month ago, I was happy to take part in yet another art show in Prince Edward County a mere five months after moving here. They're a great couple and really appreciate art in a way I hadn't seen in Toronto's galleries. Their gallery and studio space is quite nice, as you can barely see in these extremely blurry photos I took at the opening last Sunday evening: 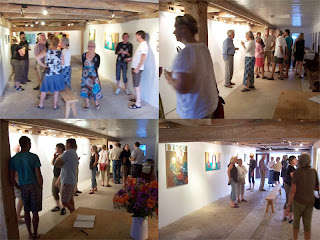 My paintings are the two seen in the bottom right photo --and are also posted below: 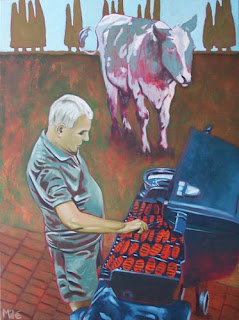 That's my dad barbecuing some kebapi while a ghost cow (?) looks on (supervises?). 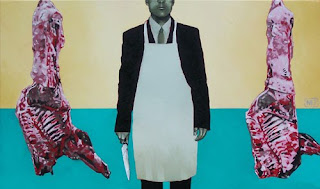 The second painting was supposed to be accompanied by the one below, but it sold from my own gallery before it was time to deliver the pictures to Blizzmax. 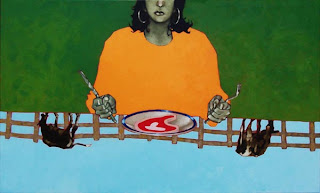 This painting (made as a companion piece to Butcher) can be hung upside-down to make it a landscape. 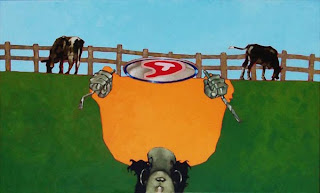 These are part of my Meat Matters series --which I'll get into in detail when I post further paintings from it.

Also appearing in Sommerfest are a number of drawings by Amitesh Verma, Small Pond's resident from New Delhi, India. Concurrently, Cousins, a two-man show, is running in the Small Pond Arts gallery until 07 August featuring Amithesh's drawings and my paintings.


I made a couple of fun posters for the event: 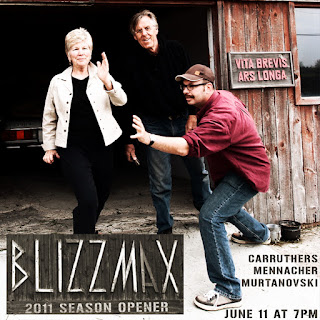 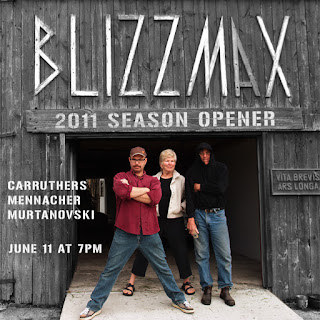