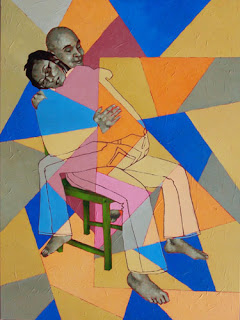 Continuing the theme of portraiture, but somewhat randomly, here's one of a couple of friends I did a few years back. I had the idea for this series after doing a photoshoot with a friend; one of the shots had him sitting on one of our green chairs, his wardrobe a long-sleeved shirt and jeans. That he was barefoot caught my interest --only the ends of his extremities were exposed. So that became part of the motif for the series (I've only done four so far (and the first one described has sold), but I have a few photos of friends for further Green Chair portraits if I ever get/make the time for them).

I was also trying out something new as far as skin colouration here, choosing to go with non-realistic colours, the chair being the only thing colored "properly." I then superimposed a matrix background but carried it into the figures, rendering them ghostly or hollow, using lighter tones where the figures overlap the background.