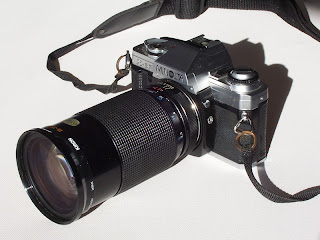 I use tons of photographic reference for my artwork and I prefer to take my own pictures whenever I can. Before the days of digital, shooting on film was the only option (which, for me, sometimes meant a roll of film might only get me two or three good pictures to use), but over the past 20-or-so years, and after literally thousands of pictures, I've learned to take some pretty good ones --my paintings depended on it. So, through necessity, I've become a pretty decent photographer.

I bought this beauty back in 1993 in the "used" department at Henry's in downtown Toronto. The body cost $200 and the lens cost $300. I've only needed to take it in for repairs once about ten years ago when the frame counter stopped working. Hm, now that I mention it, I've been noticing the frame counter's on the fritz again...

I've been taking a lot of digital photos with my tiny point-and-shoot for reference in the past five or so years (including the shot at the top of this post), but my Minolta gives me so much more versatility with its manual settings and that whopping lens gives me some great shallow depth of field (plus it can give me really tight close-ups or nice wide shots). Because of this control, I've brought this wonderful machine out of semi-retirement to shoot the reference for my 12-painting portrait series I'm halfway through, using my didgie only as a backup.

I don't usually show my reference photos, preferring to let people focus on the final paintings, rather than the image/s that led to them. Below, however, are two photos that were meant to remain photos and not be turned into paintings. In 1999 I did some poster/t-shirt/programme work for Markham Youth Theatre's production of "City of Angels" and part of my work was to shoot the main cast in retro 1940s-style glamour shots (shot on black & white film, of course). These two are my favourite: 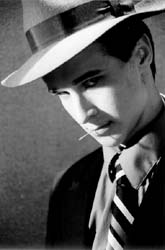 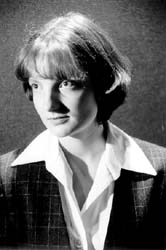 UPDATE: I've now been shooting with a Nikon D3100 DSLR with an 18-105mm lens since summer 2013 and it suits my needs perfectly. Here's a photo that would have taken more time, effort, and film using my Minolta: 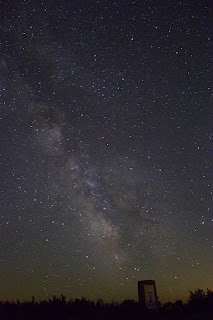 I mention brand names here only incidentally, as it really doesn't matter to me who makes the cameras I use or what format they are, only that it can do the things I need it to do (or that I can make it do the things I need to see in the end). I'm not interested in the film vs digital debate –I'll leave that to actual photographers.

For my own needs (documenting things here at Small Pond and shooting reference for my paintings) digital is more cost-effective (no more having to develop several rolls of film to get half a dozen usable shots) and faster (just insert the camera's chip into my laptop and I'm ready to composite elements in Photoshop, no scanning required).

For me, while the means can be quite interesting, they're justified by the ends. That goes for painting supplies, too.