November 29, 2011
Many desperate acts of design (including gradients, drop shadows, and the gratuitous use of transparency) are perpetuated in the absence of a good concept. A good idea provides the framework for design decisions, guiding the work.


Names are very important to Krista and me and we brainstormed dozens of them and deliberated for weeks until we were absolutely happy with "Small Pond Arts" (during the logo design process, we dropped the "Ranch" to simplify the name). The next step, of course, was to create a visual identity, mainly a logo, for this new venture, so I set about doodling some concepts that had to do with the overall theme of "a big fish in a small pond."

With the sketching underway, the typeface had to be carefully chosen; it had to convey a friendly, artistic playfulness while walking the very fine line between professionalism and whimsy (it couldn't be staid and boring, nor could it be silly and goofy). Most of all, it had to be legible at a variety of scales and in limited colours. By the time the fish design took more concrete shape, I happened to find a great typeface that simulated casual non-cursive handwriting which I then customized so it would not only fit in with our design, but be unique.

The small selection of key doodles and sketches from a few pages from my sketchbook below don't necessarily reflect a linear progression as I went back and forth between variations sometimes, doodled on scrap paper outside of my sketchbook, and did a lot of the final changes on my computer, totaling countless hours upon hours of design time. 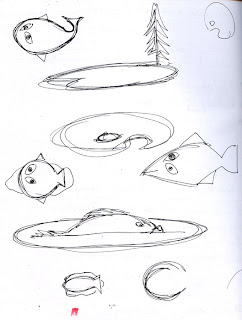 Vague doodles here, trying to incorporate a painter's palette into the design as the pond itself. The fish having two eyes on the same side is reminiscent of Picasso's cubism and are meant to evoke "art," but, since we would be dealing with all art forms, we decided to drop the overt references to painting. 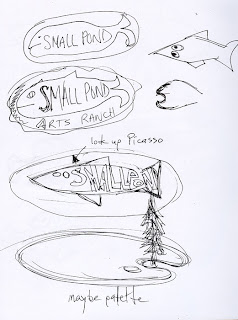 Krista had the idea to place the words "Small Pond" inside the fish and did the two sketches (top left) to give me an idea of what she had in mind. The fish still had Picasso eyes here in the first appearance of Narrow Fish, but that either made it look silly (too cartoony) or like a flounder (which would be a bad connotation). The shape of the pond is further refined to look even more like a palette, but the word "maybe" means it's now in question and likely to be dropped. 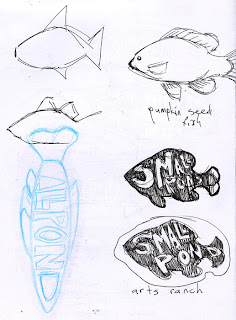 Developing Krista's idea of having the words inside the fish, I researched Prince Edward County's local fish and, amongst the many local varieties, I found the silhouette of the pumpkinseed fish to be both attractive and an easily recognizable fish shape. I then started arranging the words inside.
Note there's now only a slight hint of painter's palette surrounding the fish.
In blue pencil: return of Narrow Fish, but now facing the other direction. 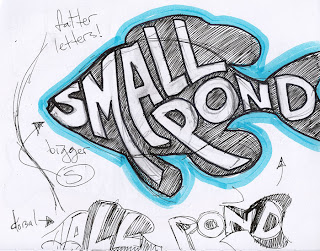 Letterform placement variations inside the pumpkinseed fish. I don't like torturing letters to conform to a graphic shape, so the extended stems of the M and the A kinda bug me here. Letters should be able to stand on their own, being legible and identified as letters (and the correct letters!) at all times. There's no confusion of that sort here, but they're still a little too "tortured;" I wasn't designing a psychedelic poster, after all.
The palette is now completely gone in favour of an outline of blue to represent the pond. 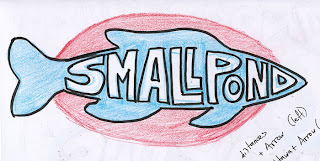 The fish facing to the left was bugging me since we read left-to-right, and facing left evokes looking or moving backward, so I tried a variation with Narrow Fish facing right. This design is a simpler fish shape which makes it easier to incorporate "Small Pond" with minimal  letterform distortion. In fact, the D fits nicely inside the head.
The "pond" is now an oval behind the fish.
The red and blue here are just sketching colours to clarify shapes and are not suggested colours. 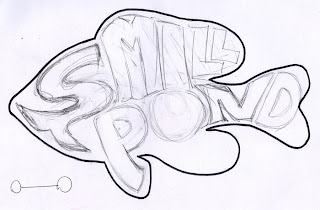 This variation appears after the red and blue Narrow Fish one in my sketchbook, but it was actually drawn before, with the other pumpkinseed fishes. If I continued with further refinement of this design, I'd get rid of the silly "tail" on the bottom of the S, and made the S smaller to accommodate a wider A. I would have also made the N less wonky so it doesn't crowd the D like that. But the negative space left over in the bottom right fin might've been a good place to put the word "arts."

Dozens of further design refinements using Narrow Fish were made with my computer. In customizing each character to fit inside the fish, I made sure the two Ls weren't exactly (mechanically) the same. The S and P are the boldest to help distinguish the two words.


Speaking of the Ls, they made placement a challenge: uppercase Ls leave unappealing negative spaces which negatively interrupt the rhythm of the rest of the characters (note that the O tucks in nicely –and legibly!– beneath the P to close up the negative space there). Lowercase Ls might not read properly as Ls (are they Is instead?) since all of the other characters are uppercase; making an exception for the Ls could be potentially confusing. The compromise of nesting them closes up the negative space a bit, but also adds to the feeling of informality that the "hand-written" letters convey –as a bonus, the negative space of the second L helps separate the two words.

The fish fills and extends beyond the oval of the pond, evoking freedom; one variation had it completely contained within the oval, but that felt very claustrophobic.

The "handmade" aspect of the characters is counterbalanced by the clean lines of the fish (in black, which highlights the letters) and the oval "pond" (in blue, of course). In this full colour iteration, the pond is enclosed by a darker shade of blue and the fish itself is sorrounded by a thin stroke of taupe, an earth-tone, evoking the land, but also giving the black fish a nice "glow" that a white stroke didn't accomplish.

The overall design dispenses with the computer-generated, mathematically-accurate lines of our online/print logos when we made our signs, and that was deliberate so the logo would have the nice "wobbly" handmade appearance that was intended from the outset.

Colours are a luxury, I believe, and a design should be able to stand strongly –and be legible!– in two colours (usually, black and white). The pond remains in the form of an oval ring, but the "water" is now white (as is the stroke around the fish). 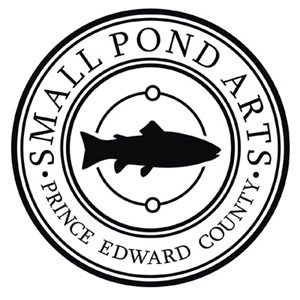 As a supplement to the main fish logo, I designed this for a rubber stamp (which we love using) and for other applications where a more compact logo serves the design better. The typeface here is the one I chose to complement the fish logo when we add words like "Arts," "Arts Gallery," etc. The circular motif brings to mind postmarks used by post offices (and which I previously used on my own website (also a rubber stamp)).

The fish is the same fish as the main logo and the two circles above and below it represent Krista and me (orbiting the fish? embracing it?).

After a few years, I decided it was time to update the logo a bit for our sixth season. Rather than going for a drastic overhaul, I simply streamlined the existing design a bit by taking away two elements: the dark teal outline around the "pond," and the light tan outline around the fish. The black and white versions remain the same.