The Lady and the Lions 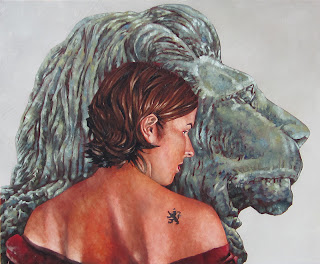 Rummaging through my old photo reference, I've started developing a series that will take me to some subtly surreal places. New photos will be necessary, but I have literally hundreds of great shots I've taken over the years to choose from. This painting is the first of this new group –I have a few others standing by, eager to be painted– which will have a decidedly strong figurative element.

Here's my friend and frequent model Ashley yet again,* this time superimposed against a statue of a lion I shot in Montreal many years ago. The addition of the lion tattoo (with crown!) during the early sketching/composition phase completes the painting and gives it a nice three-layer depth, visually and conceptually.
Feel free to analyze/interpret it as you will; you'll get now answers from me. 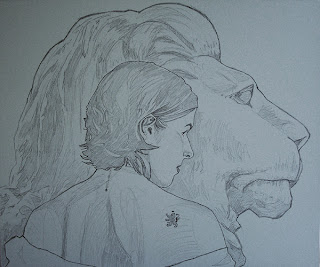 
I'm still not sure why I take this stage to such a developed level since it's not really necessary to fully render the drawing like this...but it's so much fun! 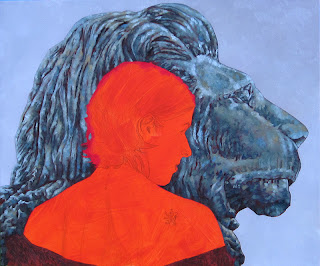 I used red and orange for the ground colours on this one –red for the lion because it was going to be predominantly green in the end (you can see a "halo" of red around Ashley's unpainted head above).

I did some tests in Photoshop to determine the colour for the background as well as for her shirt (which was dark blue in the original photo). The shirt was planned to be pure white with just a hint of fabric folds, but my ground colour choice of brown (with a bit of orange showing through above) convinced me to paint it a rich red.


UPDATE: As of 29 February 2016, this painting has a companion in The Lions and the Lady.

*In fact, the photo reference for this is similar to the one I used for Corona Solis (golf) –except her eyes are open here.