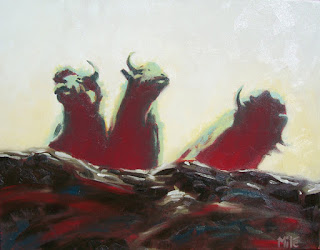 Here's some more colour experimentation, playing around with lots of red, trying for a sort of hot Albertan sunset look. Or something. It's interesting, anyway.

The buffalo in the picture are actually from a display at Head-Smashed-In Buffalo Jump museum just west of Lethbridge, AB. The museum was built on the site of an actual buffalo jump and is beautiful architecturally, being built into the ground, minimizing its visual impact. I shot the trio from directly underneath as that was most interesting and dramatic angle.

The buffalo jump was used for 5,500 years by the indigenous peoples of the plains to kill buffalo by driving them off the 11m high cliff. Before the late introduction of horses, the Blackfoot drove the buffalo from a grazing area in the Porcupine Hills about 3 km west of the site to the "drive lanes", lined by hundreds of cairns, by dressing up as coyotes and wolves. These specialized "buffalo runners" were young men trained in animal behavior to guide the buffalo into the drive lanes. Then, at full gallop, the buffalo would fall from the weight of the herd pressing behind them, breaking their legs and rendering them immobile. The cliff itself is about 300m long, and at its highest point drops 10m into the valley below.

The site was in use at least 6,000 years ago, and the bone deposits are 12m deep. After falling off the cliff, the buffalo carcasses were processed at a nearby camp. The camp at the foot of the cliffs provided the people with everything they needed to process a buffalo carcass, including fresh water. The majority of the buffalo carcass was used for a variety of purposes, from tools made from the bone, to the hide used to make dwellings and clothing. The importance of the site goes beyond just providing food and supplies. After a successful hunt, the wealth of food allowed the people to enjoy leisure time and pursue artistic and spiritual interests. This increased the cultural complexity of the society.

In Blackfoot, the name for the site is Estipah-skikikini-kots. According to legend, a young Blackfoot wanted to watch the buffalo plunge off the cliff from below, but was buried underneath the falling buffalo. He was later found dead under the pile of carcasses, where he had his head smashed in.
(source: Wikipedia)