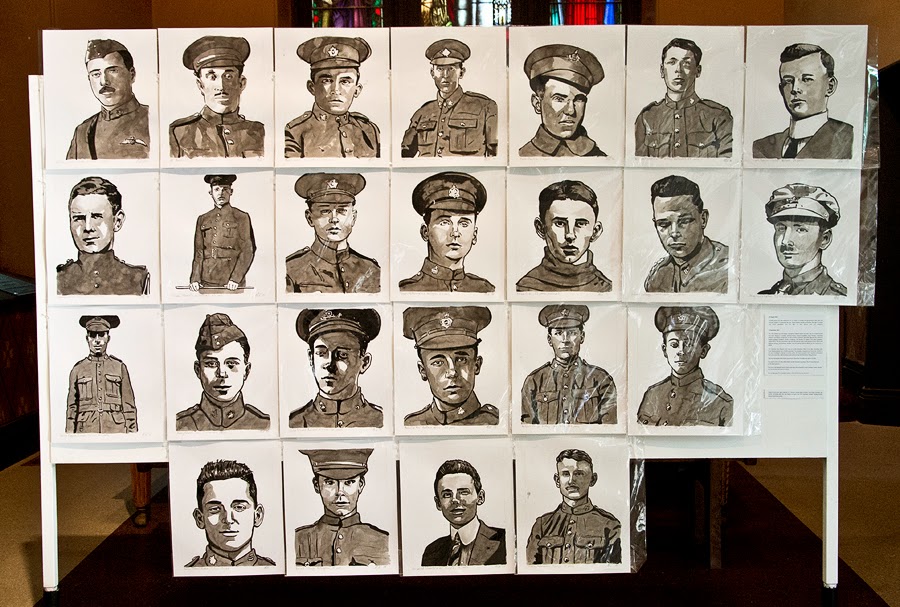 On 18 October 2014 at 8pm I started a 24-hour mini-marathon, painting ink portraits of 24 soldiers from Prince Edward County who were killed in World War One as part of my 100-painting project, To the Sound of Trumpets. My initial intent for the show was to do a 100-hour marathon and paint 100 portraits of local soldiers and then do a small number of larger oil paintings to coincide with the exhibitions of the five PEC museums. To get a list of potential subjects I went to the cenotaph in Picton and copied down all the names: 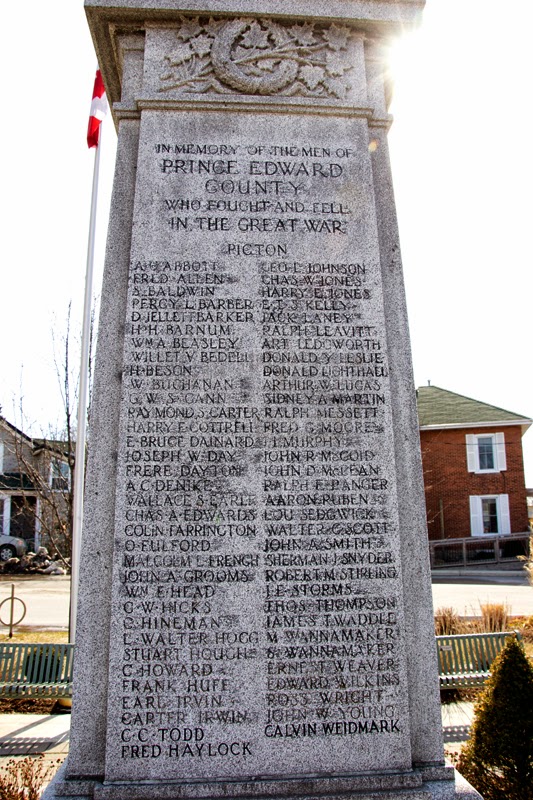 One of four sides listing the names.

There were over 150 names from all over PEC, listed by area, but I could only find viable photos (good enough for me to create a good likeness) of about 30. Obviously, I had to scale back the marathon and rethink the whole project. I decided I still wanted to do 100 paintings total so I relegated the marathon to only 24 hours (and 24 portrait paintings) and I would then have to paint 76 further paintings in oil (with Across This Antheap being an exception).

I guess because of my steady production of paintings during the months leading up to the marathon, I was painting at a more efficient and confident level so that, by around 2am (only 5 hours into the marathon) I was halfway done. If I continued at that rate, I would have all 24 finished by sunrise. So I took a break from the portraits but continued painting pictures for the project: I finished the 9 Memento Moris and did "Send More Men" in its entirety before resuming the portraits around 1pm or so.

As with previous ink painting marathons I've done (Burning the Midnight Oil and County 101) I streamed the event live online. You can still see the first few hours at the link below: I painted (and later hung) the portraits in descending order of the soldiers' ages and accompanied the display with the following write-ups:

22 August 1914
Canada passes the War Measures Act in order to provide the government with new and intrusive powers to prosecute the war. These powers include censorship, the right to detain and arrest Canadians, and the right to take control over any property.


17 December 1917
The 1917 debate on conscription, mandatory military service for men, was one of the fiercest and most divisive in Canadian political history. French-Canadians, many farmers, unionized workers, non-British immigrants, as well as other Canadians, generally opposed the measure. English-speaking Canadians, British immigrants, the families of soldiers, and older Canadians supported it. The pro-conscription side won the election and it polarized provinces, ethnic and linguistic groups, communities, families, and had lasting political effects on the country as a whole.

The Canadian War Museum lists close to 61,000 Canadians killed in the war, including 1,305 from Newfoundland and 172,000 wounded. The Canadian Expeditionary Force lost 59,544 in the war, including 51,748 due to enemy action, the Royal Canadian Navy reported 150 deaths from all causes and 1,388 Canadians died while serving with the British Flying Services.
The Commonwealth War Graves Commission figure for Canadian war dead is 64,990.
The report of the U.K. War Office listed 56,639 Canadian war dead, 149,732 wounded and 3,729 taken prisoner.
The Soviet demographer Boris Urlanis estimated that included in total Canadian military deaths are 53,000 killed and died of wounds.

The average age of the Canadian soldier in World War One was 26 years.