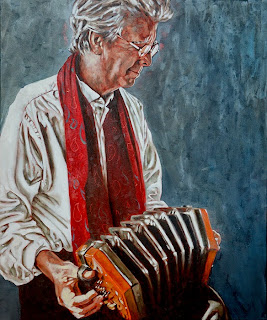 This is the portrait I painted of Toronto-based musician George Meanwell which I submitted for the 2015 Kingston Prize for portraiture.

I took many photos of George playing concertina, banjo, and cello during his stay here at Small Pond back in November 2014. It was always a delight to hear him practicing in his room upstairs, and even better to have him play while he posed for me. I got a lot of great shots, but I was only planning on painting two portraits (and submitting the one I liked better), so I sadly had to cut the cello (but who knows –maybe one day I'll paint another portrait of George playing it).

Incidentally, the very first portrait I submitted to the KP (in 2011) was a painting I did of PEC farmer George Emlaw (which didn't make it into the exhibition). The next one (in 2013; it takes place every other year) was a self portrait (this didn't get in, either). So, here I am, two years later, and I've submitted another painting of someone called George. Two years from now it'll probably be another self portrait. Then, in 2019, I need to find another George... 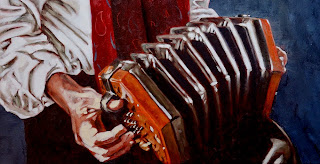 (detail of that sweet squeezebox)