The Lions and the Lady 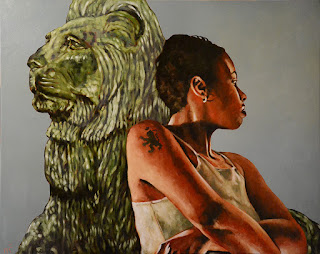 
This painting is number 11 of my Tournament of Shadows series and is a companion, in a way, to an earlier Tournament painting called The Lady and the Lions.

The lion is based on a photo a I took of a statue in Montreal many years ago (the same statue –from a different angle– featured in the companion painting), and the tattoo of the royal lion is based on the same design as the other tattoo. This one features a woman named Aisha, and the companion features a woman named Ashley, both of whom I've featured in many other paintings (in fact, Aisha here is in a similar pose as the one she strikes in Corridor). In The Lady and the Lions, Ashley and the lion both face right and the tattoo is in opposition; here, the lions both face left and Aisha is in opposition.

Feel free to draw your own further connections and conclusions. 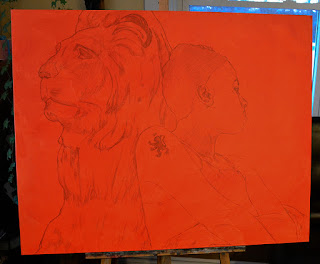 This painting sat like this, ready to go, for a very long time before I got the lead out and started working on it recently. I've tried various colours as starting points over the past few years, but I still like using Olive Green to block in the shadows, as seen here. This works for me for figurative subjects (regardless of skin colour) as well as non-figurative subjects (see lion blocking below). Of course, using the same colour to block unifies the overall painting. 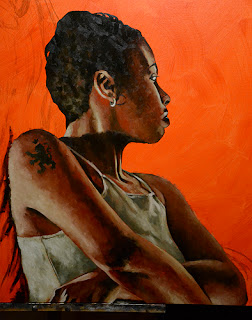 I would have to wait until she's completely dry before adding the final pure white highlights here and there. Adding them now would result in the white mixing with the existing colours and not give me the result I want, or I'd have to lay it down thickly, resulting in unwanted texture. Patience is key. 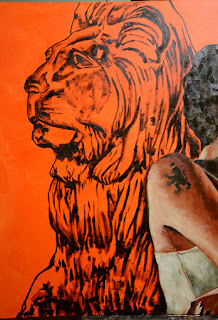 Blocking in the lion.

As with Aisha, I used Olive Green to block in the shadows here. Keeping track of the beautifully sculpted fur was tricky, but essential if I wanted to keep things from looking like a disorganized mess and not looking like much of anything, be it real fur or bronze statue. Same thing goes for drapery and rocks. 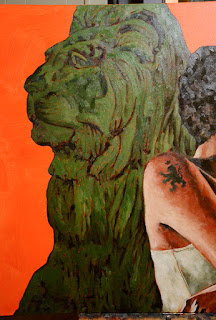 I blocked in the mid-tones carefully, making sure the lines/forms still read like fur. It's not a perfect copy of that specific statue's sculpt, but it doesn't have to be; it only has to look convincingly enough like a statue of a lion. 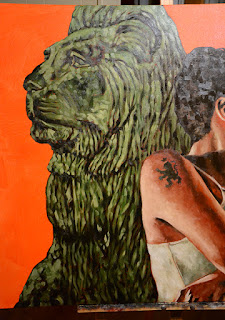 The highlights I added helped define the lion's fur, but the groupings were kind of a cacophonic mess of lines (further complicated at this stage by the orange ground which vibrates against the greens). I would have to lighten some of the shadow areas with a glaze of white to unify those areas and "push back" the lion a bit (as though there is atmospheric haze distancing the two subjects). 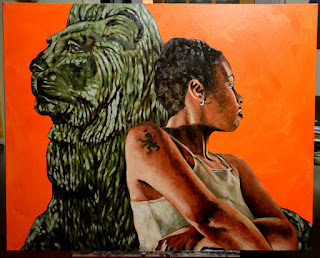 Both subjects are now as complete as they can be before the lion gets a light glaze and they both get final pure white highlights. 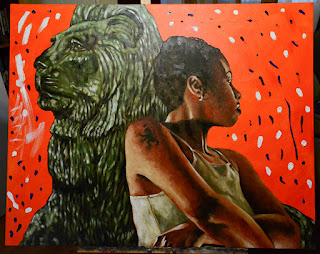 A few weeks later, confident that the figures were completely dry, I applied a light glaze of white on parts of the lion and then added final pure white highlights to both. The background would be a solid colour similar to, but not exactly matching, the companion painting. The dabs of colour here are Olive Green, Titanium White, and Ultramarine (using brown instead of green would have brought the BG closer to the other painting, but I didn't want that). 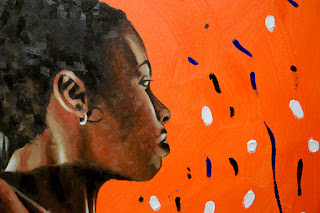