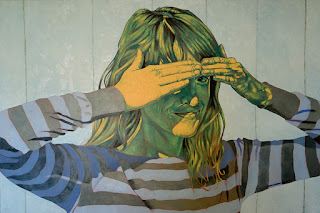 This is one of two large paintings I did of Toronto-based musician, Kelsey McNulty, with the plan of submitting the one I liked better to the Kingston Prize for portraiture. I did this last time in 2015 (the competition is only every two years) with my portraits of George Meanwell (also a Toronto-based musician) where I painted him playing banjo and concertina and submitted the latter. I think this painting came out very well and I like it a lot, but I felt since Kelsey's a musician, submitting the painting featuring her and one of her instruments works better as a portrait, rather than just a painting, of her. 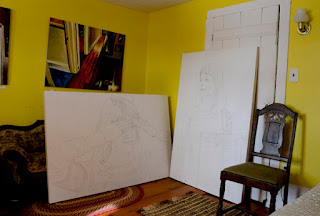 Both portraits in their pencil stage (on the right is Kelsey with Accordion) in my "winter studio" upstairs at Small Pond. It was like doing a residency in my own home, with me napping sporadically between painting sessions and coming downstairs only when absolutely necessary. 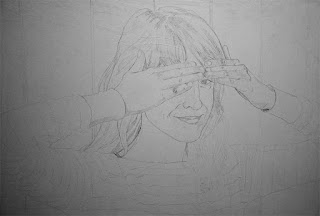 Here's a better look at the pencil stage; just graphite on gesso (over wood panel). A coat of transparent, but bright, orange acrylic will go down next to serve as my ground and show through wherever my applied oils are thin. I've tried several different colours for my ground, preferring orange for its warmth regardless of the image going over top (this includes winter scenes). 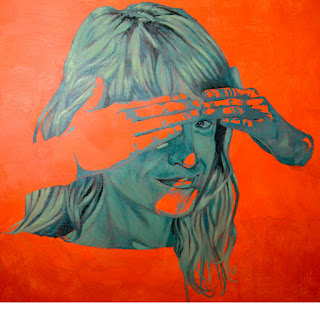 I was originally going to paint this in realistic colours, but a chance glimpse of a magazine cover that featured Vincent van Gogh's "Almond Blossom" changed my mind and I tried to apply the colour scheme he used in that painting, using greens and yellows for the skin and hair, and blues for everything else. 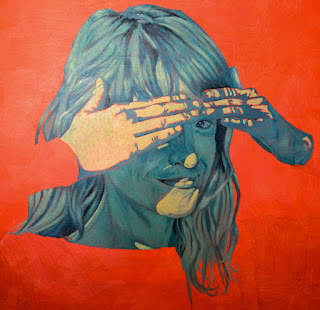 Having a bright orange ground, applying colours can be tricky, especially if they're blues, as they tend to vibrate and create weird afterimages in the eye. Still, I trusted my instincts and the colours mixed on my palette and kept going. 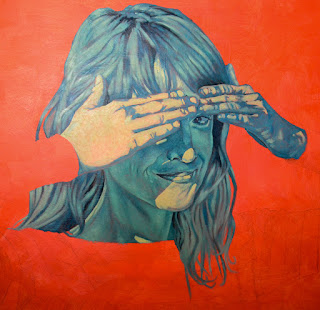 Working in such a huge scale was very fun and it allowed me to really get in there and make some tiny and subtle details so that, when looked at from a few metres away, the realism of the forms looks pretty good (despite the unrealistic colours). 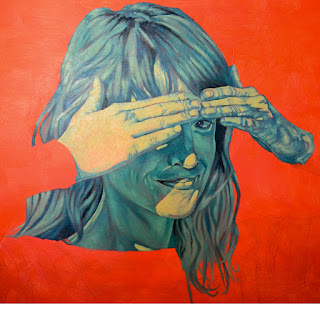 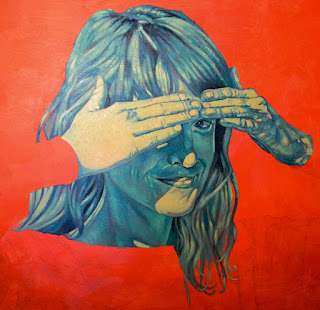 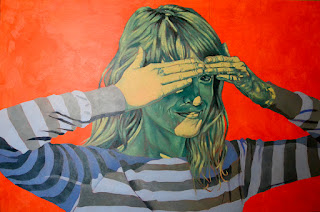 The face and hair are done for now, waiting for them to cure and add super highlights and shadows later. For now, the shirt needed to be blocked in. Kelsey's shirt was orange and black (which you can see in my other painting of her) but I didn't want to go too dark since I wanted to concentrate the greatest contrasts in the face and hair.

I debated whether to do any gradient rendering on the shirt or just leave it like this, looking flat like a screen print. I debated this all the way until the end and decided I liked this look a lot, leaving the complex rendering isolated to the face and hair. 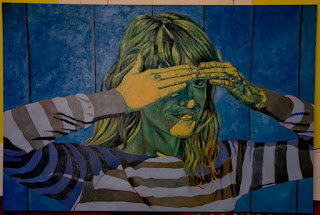 I'd photographed Kelsey in front of one of our sheds and the blue here is almost exactly accurate, but it wasn't as light as I'd hoped (to follow van Gogh's painting)... 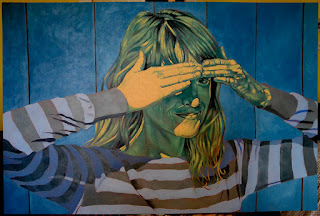 ...so I went over the background after it had mostly cured (while working on the other painting) with a light blue which still wasn't light enough. While my first attempt at lightening was still wet I applied lots of pure white and blended that in to get my final, desired, preferred result. 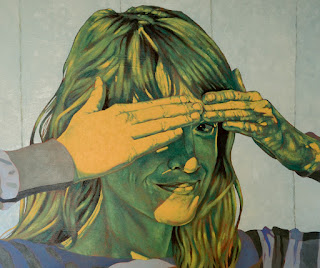