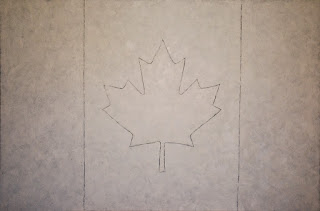 Peter and Alice of Blizzmax Gallery had asked if I would like to participate in their One 5 Oh Canada show celebrating Canada's 150th birthday this summer and, always happy to be part of a Blizzmax show, I said yes, not knowing right away what I could/would/should submit for inclusion. With an eye towards positivity and celebration (rather than grim political commentary) I settled on aping a couple of Jasper Johns paintings of American flags and giving them a Canadian twist.

This one is a riff on his White Flag (1955) which I did with just oils on canvas (rather than his encaustic, oil, and charcoal on canvas) and is much smaller than his flag. Because I used one medium instead of three, I had to create an illusion of depth as well as rely on many layers of gesso and paint for actual texture. My flag paintings are less complex as a result, but no less fun and whimsical.

My other painting is a Canadian version of his Three Flags (1958) which I titled Hat Trick. 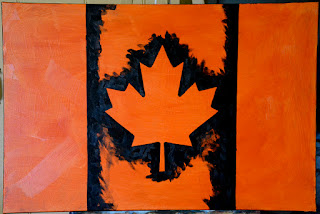 Over a few layers of gesso (for added texture) I did as precise a tracing as possible of the maple leaf in our flag because accuracy was important here. The design of the leaf in the Canadian flag is almost impossible to draw freehand and almost no one can get it right.  The proportions of the other elements vary in my flag paintings, but the leaf HAD to be correct.

Then after I covered the surface with orange acrylic for my ground colour (as usual), I reinforced the perimeter of the leaf with black acrylic. 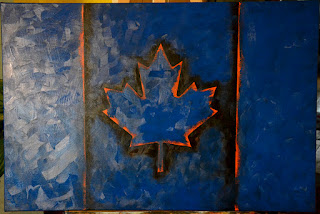 Okay, Blue Jays!
(or whatever)

I wanted the white to sit atop a range of dark colours so as not to be pure, flat white, so I started with some cyan (in acrylic so it would dry faster –speed at this stage was important because the show was coming up soon and I wanted to give myself lots of time for the pure white oil portion). 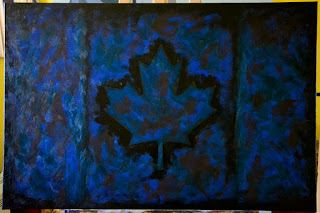 Still using acrylics I added some brown and green to vary the colours and then emboldened the outside border with more black. 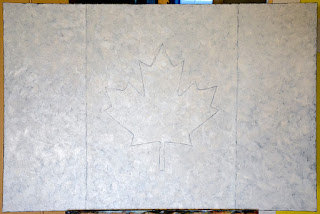 This is the first round of white oils and the colours underneath are showing through nicely, but another session of pure white (once this stage was dry) would be needed for stronger coverage and the look I was after (not a copy of Johns, but capturing the essence of his paintings in my own idiosyncratic way).