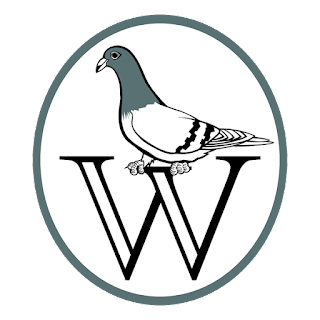 Winnipigeon Logo for The McLuhan Institute
Ink and digital, 2018

I was recently contacted by Andrew McLuhan (a friend, master upholsterer, and a former colleague at the Regent Theatre (he's still there; I'm not) about doing a logo for The McLuhan Institute (he also happens to be Marshall McLuhan's grandson). He had a very clear idea what he wanted, but felt he couldn't execute it to his satisfaction.

The idea was of a pigeon perched atop a W, which could then be inverted to become a pigeon hanging from an M. The M is, of course, for McLuhan (and Marshall, too), and the W is for Winnipigeon. I'll let Andrew's comments from the TMI Facebook group explain that last bit:

"Marshall McLuhan referred to himself as a 'Winnipigeon.'

"I think I first came across that reference in this issue of ChicagoLand (July 1969) in his article 'Media--And the Making of the Midwest,' where he writes: 'As a "Winnipigeon" (Winnipegger), Minneapolis and St. Paul represented for me the most immediate features of American urban life.' (pg. 12, I think)

"He goes on to speak of Winnipeggers collectively as Winnipigeons one or more times in that article. I've also seen or hear him refer to himself as such other places, and other people have mentioned his habit of calling himself that (my aunt Elizabeth is quoted, and Richard Altman has made a great documentary called 'I Am A Winnipigeon' which you should watch...) - though I've not found any explanation of why he did." 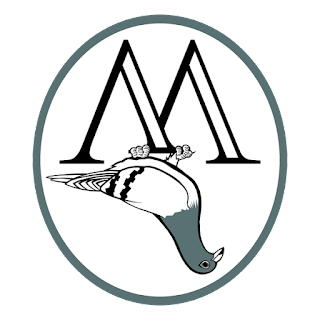 Another idea Andrew has is to eventually have this logo animated and rotating, which will be fun to see. 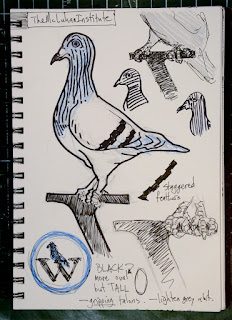 Andrew suggested Times New Roman for the W, but said I could use a different typeface if I felt one worked better. He preferred something with serifs, and I agreed, since serifs would provide a natural "perch" for the pigeon (my sketches above have it perched on an outside serif in case I found an alternative W without a middle serif)). I looked around but Times New Roman had that nice serif on the middle peak of the W and, since Andrew suggested TNR and I had no objections to it, I simply went with it, happily.

I did a few variations of the head with lines in case I decided not to go with a flat colour fill and also played with spreading the feet apart so it looks more stable (especially when inverted). When drawing the stripes near the bottom of the wing, I stumbled upon a slightly staggered pattern that I decided to exaggerate to further distinguish the design.

I also drew a circle around the whole thing based on Andrew's mentioning of possibly making lapel buttons and I wanted to see how the design might look with a border (and it would give me a place to echo the blue-grey colour of the bird's head). At our consultation when I had some designs to show Andrew, he said he liked the circle and was going to suggest just that –but maybe an oval instead, evoking an "egg" to go along with the bird.

One of my cardinal rules for working with typefaces is not to alter them by squishing, stretching, or skewing them, but that applies to paragraphs, sentences, or titles; a few letters, a word, a name –certainly a single letter– is fair game. So the circle was squeezed into an oval –and the W got squeezed along with it (and later customized further). 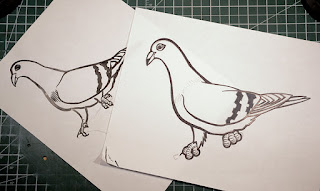 The bird on the left was the quickie done for the demos I showed Andrew at our consultation and the one on the right was done afterward for use in the final logo. Because I wanted the pigeon's head and the W to be the most prominent elements, I didn't add any colour to the tail feathers or the feet, instead I used many lines close together, which makes a sort of grey half-tone compared to the white body of the bird. 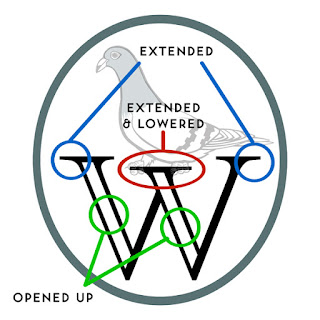 After our meeting, Andrew sent me a message with a sketch suggesting perhaps a W that isn't solid might work better. I looked for a typeface comparable to Times New Roman with that in mind, but wasn't satisfied. Plus, he seemed to really like TNR, and it already had that nice middle serif for a perch, so I decided to customize the TNR W instead of using something else.

I had already dropped the middle peak prior to our meeting, but after squeezing the W to work better in the new oval border I extended the outside of the left and right serifs to echo the extensions I did on the middle one and give the letterform back some of its width lost in the squeeze. The extensions also add a little something; a little character; something maybe only noticed subconsciously, but it looks and feels right. 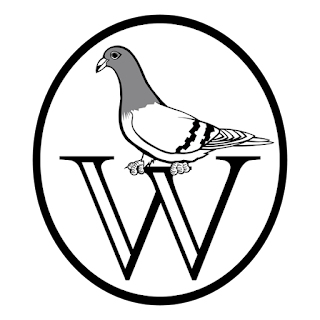 I like to always provide a black and white version of the logos I design just in case they need to be printed without colour (a habit I developed when I designed stuff for indie bands in the '90s and printing in colour was often prohibitively expensive). Here, I simply desaturated the pigeon's head and made the oval black.

This was a fun project to work on and it's always great to have someone who clearly knows what they want and can direct me to that goal.

Unknown said…
Thanks Milé! You hit it out of the park!