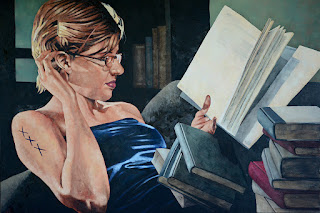 This fall I'll mark thirty years since I started painting in 1988. Unlike my 25th anniversary, I'm not making such a big deal about this one...for some reason...but I did want to commemorate the occasion with a painting. For my silver anniversary I used actual silver leaf in the painting (Silver Jubilee, which also features Ashley). That painting also literally references 1988, 2013, and 25, and the alchemical symbol for silver; I don't regret any of those choices, but I wanted to do something more subtle this time. 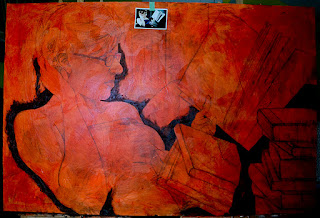 In brainstorming ideas for this painting, I went back into my picture archive and found a variant on the photo I used as reference for my 20th anniversary watercolour back in 2008. It's nearly the same pose, but different enough to still be interesting, for example, I like that she's tucking her hair back like that, which gave me the opportunity to get in there and really describe the complex shape of her forearm down to the elbow. Plus, there were books in her lap...then I added more. Incidentally, the book she's reading in the earlier painting is the bottom book on her lap in this painting. 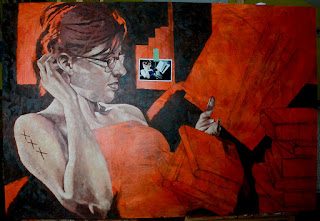 The traditional Thirtieth Anniversary gift is pearl but I didn't want to be literal (like burying her in chains and chains of pearls, or something) so I went metaphorical, using the abundance of books in conjunction with the title to convey the idea. Also, the three decades are marked in tattoo form, but the three Xs representing the Roman numeral for 30 look more like stitches, which must mean something... 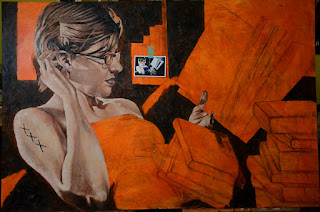 The only concession to making a big deal of my 30th is this painting's size. For my 20th, I used the largest size watercolour paper I felt comfortable dealing with (20" x 30"); for my 25th, the painting I did for that was quite large, too (36" x 60"), but just a little bit smaller than my 30th (40" x 60"). So, then, seeing as each anniversary painting has gotten larger each time, do I do an even larger painting for 35? Whatever I do, it'll probably feature Ashley, though... 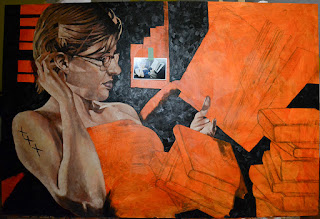 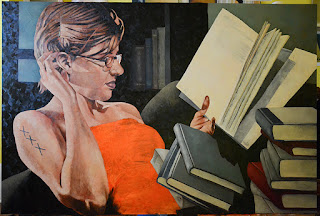 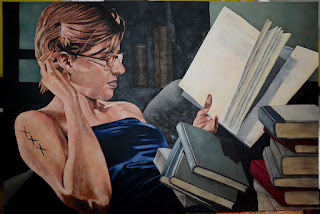 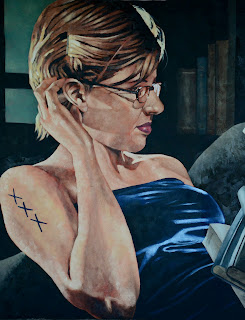 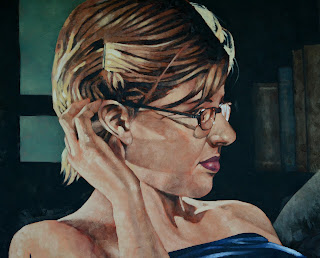