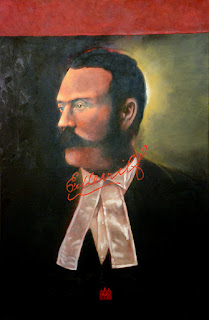 When I was first approached by the new owner of the Merrill Inn (now called Merrill House) to do a portrait of Edwards Merrill, original owner of the house, I thought it might be a fun challenge...only slightly daunted by the fact that there were hardly any images of the man (I only came across two different pictures, both of which looked kind of weird and didn't have much detail).

My approach was to capture Merrill's likeness as well as I could in a formal composition inspired by the portraits of John Singer Sargent, include some romantic/moody atmospheric effects inspired by the illustration work of Bernie Fuchs, and have some contemporary elements (all the red bits) because I am me (and I seem to paint and compose in a certain idiosyncratic way that's as much intuitive now as it is deeply considered). 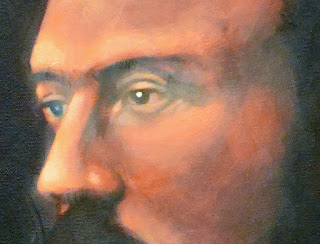 It took a lot of back and forth effort over several weeks to get this kind of atmospheric haziness just right because I'm new to glazing with oils (yet immensely familiar with glazing in watercolours, so that prior experience helped a bit). There were many periods when I thought this whole thing was going badly and that I should give it up...but something told me that if I just kept going, I'd get to a point that satisfied me, my standards, and what I felt this portrait deserved. This doubt is quite normal when going outside of your comfort zone, however slightly.

I'm not sure where the idea of the red rectangle came from, but I couldn't really shake it from any of my preliminary composition sketches. However, that dramatic shape works as an anchor to a triangular composition within the overall painting (made up of the three flat red elements, leading down to the tiny house), in the middle of which is Merrill's melancholy face. 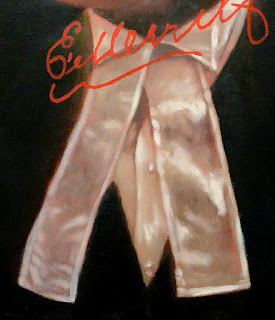 I added the tabbed collar to reference Merrill's time as a judge...and these serve to lead your eye back up to his face after having been directed from the red rectangle up top, down to his red signature across his neck (symbolizing his alleged suicide by hanging), directed down further by the point created by his dark waistcoat and white shirt, down to the tiny red Merrill House at the bottom, his lasting legacy and where this portrait currently resides. 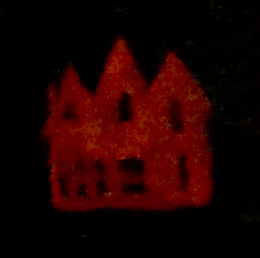 
In the end, I'm extremely happy with this portrait as I feel it suits the story of Edwards Merrill, has some contemporary elements which I bring to the table, and is, overall, quite haunting without being too creepy (a little creepy is okay).