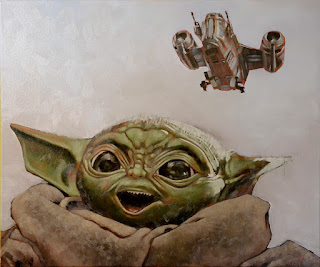 As The Mandalorian TV series reached its end in December 2019 I really wanted to express my enjoyment of the show and the character of "The Child" AKA "The Asset" AKA "Baby Yoda" in a painting (which quickly became two paintings). Partly because I'd been creating videos about my paintings for a few weeks at that point and partly because I was curious to see how it would turn out, I decided to record my progress on video (rather than my usual documentation in still images) and upload them to my channel as time lapse videos.

And it was on New Year's Eve, 2019 that, while reviewing my rough cut of my other Baby Yoda time lapse video that I realized I was in love with the format and decided that that would be my next move; I would record and make time lapse videos of all my paintings from that point onward. I think it's great because it keeps me in the practice of painting more regularly than usual, people can see my process, and what takes my many hours or days to paint can be viewed in mere minutes!


The reference I used was from a scene where the kid is riding in a satchel attached to a droid who's protecting him, and they're travelling at high speed on a speeder bike (which is why his left ear is bent back, flapping in the wind). The reference was wider than my canvas, which left too much empty space in the top third of the canvas, so I added the Mando's spaceship coming in for a landing. I had initially blocked in and painted most of the robot in the background, but it wasn't working due to lack of context and it was crowding the ship, so I completely painted it out, leaving a much simpler and easier-to-read composition.

For the sake of convenience, I created a shorter video (excerpted from the main one) focusing on my painting of the spaceship component all on its own: