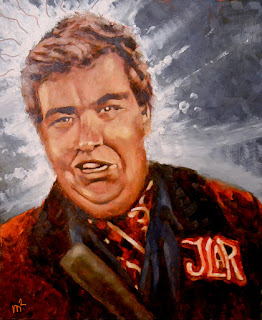 One late Friday night (likely some time in 1979 or 1980), during one of the many, many sleepovers at my cousins' house, we tuned in to SCTV. I'm not sure I got all the jokes –certainly not all the references– but I knew it was something this 8- or 9- year-old liked.

I would keep up with SCTV for years, on whatever channel I could find it, and it was in the mid-'80s that I started noticing the name "Malabar" in the credits, listed as providing costumes (of course, the costume designer was the brilliant Juul Haalmeyer).

In 1990 I started attending the Ontario College of Art (now OCAD University) on McCaul Street (about midway between Queen and Dundas in Toronto) and, just one block north of Queen, was Malabar Costumes. The name recognition from watching countless hours of SCTV gave me a distant sense of vague connection: the art school I'm going to is on the same street as the costume shop that serviced my favourite comedy show. I never went inside Malabar during my two years at OCA, but I smiled just about every time I passed the shop.

While looking for work in 2003 I saw an ad looking for a costumer at, lo and behold, the Opera Department of Malabar Costumes on Brock Street (I mistook it for Brock Road in Pickering, much closer to my home than its actual location in downtown Toronto). For three years, I assembled costumes for many opera companies in Canada and the USA. Sometimes, my duties would take me to the HQ on McCaul St. (I finally -now, regularly- went inside that mythical building I passed hundreds of times over a decade earlier). 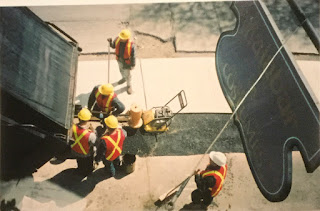 I took this shot from the second floor of the Opera Dept.
on Brock St. (I brightened the sign a bit for legibility). 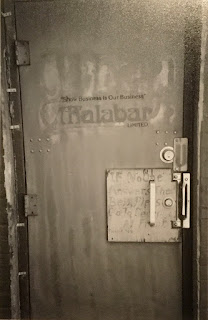 This door was on the main building
on McCaul and led to an alleyway.

Much of the crew at Malabar had been there for a long time and remembered the SCTV days. I heard a few stories about the cast and Juul, but my absolute favourite thing was seeing some of the costumes used on the show (much of which were stock items, like formal period suits and dresses). I got to see the Shmenge brothers shirts (with "John" and "Gene" still written on the inside) and I even got to try on one of Dr. Tongue's vests. It was magical.

So get this:
1970s: I see first-run SCTV as a kid;
1980s: grow to enjoy the show even more; notice Malabar credited as providing their costumes;
1990s: go to art school down the street from Malabar;
2000s: work at Malabar in the Opera Dept.;
2020s: paint portraits of my favourite SCTV characters.

Good afternoon, how are you? I am Brazilian and I am looking for new followers for my blog. I can follow you too.
https://viagenspelobrasilerio.blogspot.com/?m=1

If you follow me you can send the link to my blog and I will follow you back.