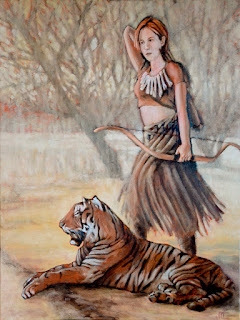 Like a number of recent paintings, this one's also based on decades-old photo reference, but one I hadn't looked at in years and never attempted to paint until now. I think it turned out better than I imagined when my friend, Janet, and I shot it back in the mid-'90s. Plus I feel the tiger companion really helps underscore the sense of strength and resilience I wanted to convey.

Early concept sketch.
I had Janet in mind when I sketched this at work (at The Shopping Channel –on the back of a "flow sheet" for a dinnerware show) –that's why it's stapled in my sketchbook. I should have followed my sketch when I was posing her arms for the photo –they're more dynamic in the sketch.

I guess, realistically, her hair would be much longer if she was out in the wilderness, but I liked her short haircut in the source photo so I kept it here. Who knows...Maybe the tiger's a really good stylist.

Here's the time lapse video of me painting these buddies: