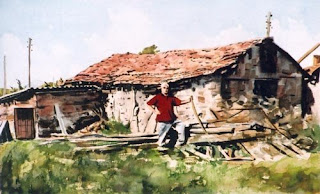 Continuing what I've decided will be Stojan Week is a painting of my dad in the village of Nošpal in Macedonia at his childhood home on the farm --which has been in our family for generations. The building he's standing in front of used to house the cows and chickens and was around well before my dad was born. The walls are made up of handmade (and homemade!) sun dried clay bricks, similar hand-mixed and sun dried clay mortar, and the roof is covered in not-homemade ceramic tiles. You can clearly see by the sagging middle that its on its last legs.
The reference photo for the above painting was taken in 2002. The picture below was taken in the fall of 2007. 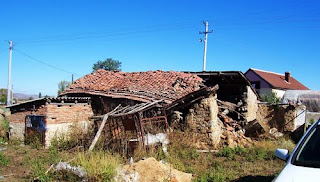 
I was shocked to see it in this state after having painted it just a few years before. The farm no longer has any livestock and is currently used to grow tobacco (underneath the plastic tarp on the far right). Overgrown plants abound, gradually reclaiming the land and, except for a cute little guard dog, no one has lived there since my grandmother died in 2003. It's now being taken care of by the neighbours and my uncle, Radé, my dad's youngest brother. He visits from time to time, but lives in the city of Bitola, about a 45-minute drive away.
farm Macedonia Milé Murtanovski Stojan Murtanovski watercolour painting