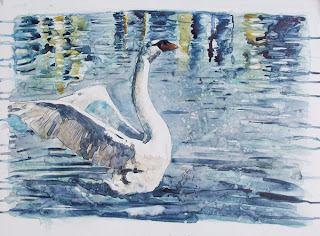 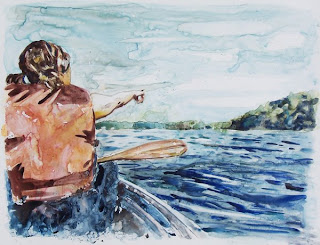 
Without trying to sound like an advertisement or paid endorsement ('cause it's not), another thing I like about Yupo is that once the paint is dry, you can erase the bits you don't want. A pefect example in this painting is the swan's neck: there was some overlap of paint where the front of the neck "touches" the water and I wanted clear delineation, so I used a bit of clear water on my brush and simply wiped away the paint, creating a sharp edge. The same goes for the highlights in the beak, the water in both paintings, the clouds, and the top of Krista's arm (among other fiddlybits).


To the right of the swan you can see I'm beginning my experimentation with spattering clear water on the paint as it dries on the surface, creating a mottling effect. More of this is seen in my car paintings. Also, on the left and right are some experiments with making the paint run and letting the streaks dry.


The swan's title is cheeky; I shot the reference for this in Vancouver's Stanley Park a few years ago and not while I was in Switzerland just over a year ago --I actually almost made that mistake because I really liked a certain place in Lucerne called Schwanenplatz.

The reference for Krista was shot while canoeing at a friend's cottage a few years ago. I'm including this painting to the post to help demonstrate how very cool water looks when rendered on this surface because the paint looks like it's still wet, fluid and likely to flow unpredictably to undesired areas --of course, this effect (like most paintings) looks much better in person.