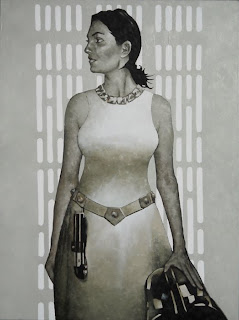 Kimwun bears only a slight resemblance to Carrie Fisher --and I didn't even try to make her look like Fisher-- but the model is a little older than Leia in the movies and I wanted to convey that some time had passed.

She's deliberately posed looking to the left (the past), holding the helmet towards the bottom of the frame in a sort of tentative acknowledgement of her heritage, whereas Vader's lightsaber on her belt is a more overt acknowledgement, implying that the wielder of the weapon is more significant than the weapon itself.

The common "Imperial wall" as background is literal and figurative (and a very cool formal element): the struggle between Good and Evil is never black and white --that's why the painting is coloured in shades of grey.

I love sci-fi so much, but it almost never turns up in my artwork. I wanted to make a Star Wars painting that wasn't a bombastic fight scene or a cheesy collage of faces. I wanted to make something more fine-arty that happened to deal with some Star wars characters and themes. It was originally planned as a triptych, but the other two paintings didn't appeal to me as much as the lovely simplicity of this composition.
Princess Leia, Star Wars, etc. are copyright Lucasfilm, Ltd.