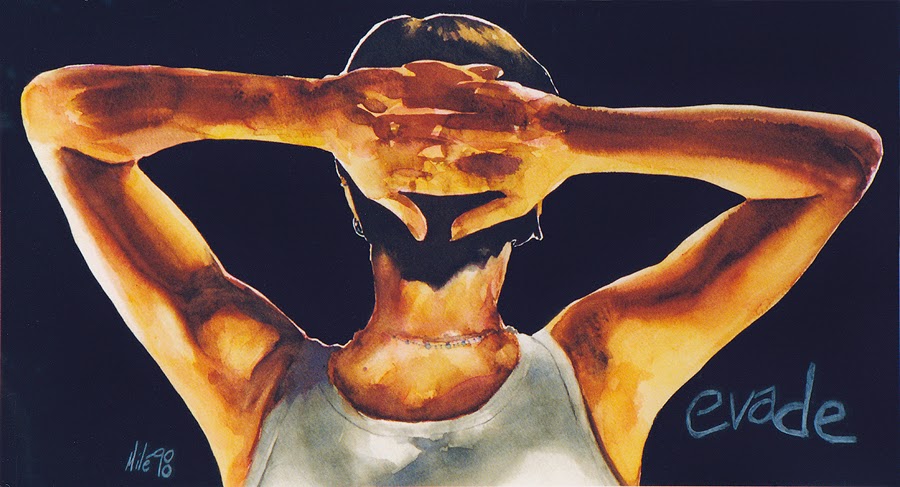 This was done during 1998 when I'd set myself the goal of painting one picture per week (I had some extra time at the end of the year and I ended up making 63 in total). This exercise was very beneficial to my development as a watercolourist (I had yet to get into oils...or inks, for that matter) and as a conceptualist. Practice is a good thing, but I didn't want to be merely doing the same thing over and over (although, maybe it looked like that to some people), so I had to come up with new ideas for images.

I collect words –words or phrases that can be interesting titles for paintings (or anything) get jotted down in my sketchbooks regularly, and, if they don't get used, I usually transfer them to the next book. One of my sketchbooks has a page that contains a list of mostly one-word titles and has four sketches for potential paintings on it and this is one of them. That sketch, and the one later in the same book based on my photo-ref shot for this painting, are too hideous to include here. Suffice it to say that they are both similar in composition to the finished piece.

Other mostly one-word titles on that list that eventually became paintings: learn, intent, wall, figment, boom, clear, breathe, umbilical, antidote, mythological, orbit, mad, and unravel me. Most of these were painted during Operation: Waterstorm.

This painting, and nine others (a few watercolours, a few oils; some old, some new), was in the Fall Expressions group show at Gallery ArtPlus in Belleville which ran from 28 October to 27 November.