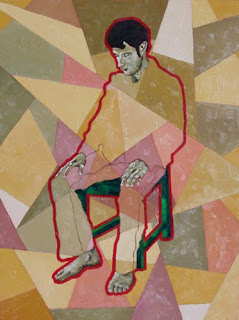 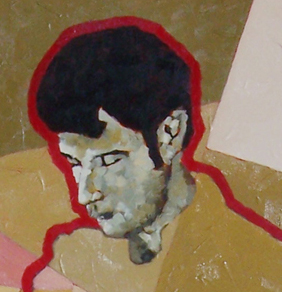 This painting of my old friend Chris Patheiger is the one described in this post as being the first of this Green Chairs series. I was trying out something new as far as skin colouration here, choosing to go with non-realistic colours, the chair being the only thing colored "properly." I then superimposed a matrix background but carried it into the figures, rendering them ghostly* using lighter tones where the figures overlap the background.

I only did four of these before moving on, but I have a great reference image of Kimwun on a green chair for a fifth portrait (perhaps this winter?) from our photo shoot the Kitchen Warfare Trilogy was based on.

*Or "hollow" –in fact, the working title for this series (still in use as the folder name on my computer) was "Hollow Oils."