Self Portrait of the Artist as a Young Fool 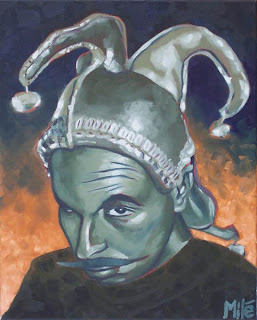 Yep, that's me and, although I chose to wear Rigoletto's fool's cap for this self portrait, I'm not sure where the fiery background came from (I honestly don't think I intented flames or "Hell" when I was painting that –just warm colours), but it does sort of comment on my state of mind at that time. Also, since 2007 wasn't a significant year anniversary-wise (the following year would be my 20th anniversary of painting in watercolours, and to celebrate, I painted this piece), I don't remember what prompted my painting of this.

Come to think of it, I did this self portrait in 2001 which also had no temporal significance except for the fact that I was almost exactly 29 1/2 years old when I painted it. There's also this cheeky self portrait to consider, which was my last deliberate (but, again, cheeky) self portrait. I turn 40 in a few days and I've been gathering self-shot reference photos for another self portrait to be done in the next few weeks, again in oil but quite large this time.

The moustache is actually only a little bit exaggerated.