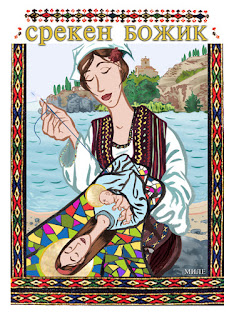 This was the first Christmas card I illustrated because I wanted to send out something I made myself to friends and family. Being a Christmas card I figured it should feature the Big J (Baby J?), but I thought it would be more interesting to be a little circumspect, so I came up with the idea of having a woman (modelled by Krista, by the way) doing a needlepoint of the magic baby and his mom.

The landscape in the background is a scene an Orthodox monastery in the lakeside city of Ohrid in Macedonia.

The following year I made this other card which focused even more on traditional Macedonian and winter imagery and less on the religious aspect (although it did still say "Merry Christmas" in Cyrillic).