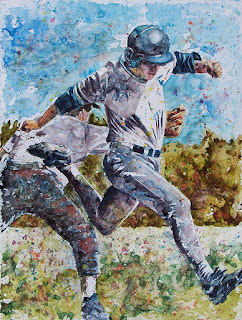 This was my only watercolour painting for 2012 and it was a bit of a challenge since the reference material was a black and white newspaper photo from when Tim Nikita (my brother-in-law), the foreground subject, was in high school. There was very little detail to work with and figuring out the colour scheme of the uniforms was difficult as the high school no longer has a baseball team and archival photos don't seem to exist online (I couldn't ask Tim because his fiancée, Meagan, commissioned this as a surprise Christmas gift).

Meagan discreetly asked around and got me some colour notes for Tim's outfit, but I coloured the opponent to best contrast Tim while keeping somewhat in line with the photo ref.

I couldn't really see the details in Tim's face so I made this about the action of him running to home base rather than it being a traditional portrait of him. Incidentally, I snuck Tim into my portrait of Meagan for my Burning the Midnight Oil ink painting marathon, but you can barely see his face there, too, so maybe I should just do a full-on portrait of the guy some day... 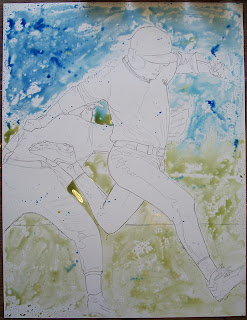 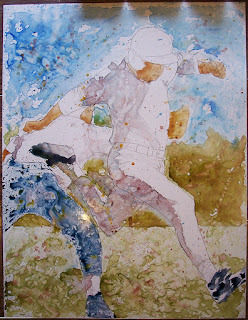 Shadows and skin (including baseball glove) are blocked-in; foliage is delineated between bushes and grass. 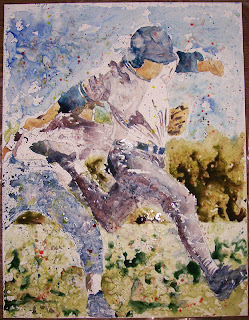 Temporary chaos as more areas are blocked-in and the splattering of paint really gets going. 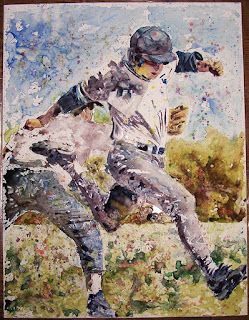 Addition and subtraction: some details are carefully painted while taking some paint away better defines the shapes. 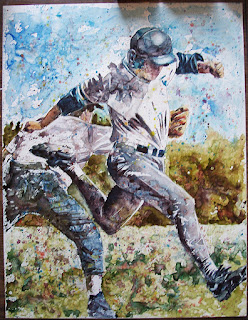 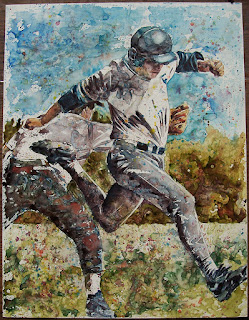 Nearly there: only one final pass of finicky details, adding and subtracting, is needed to complete the painting.