Seized of the Matter 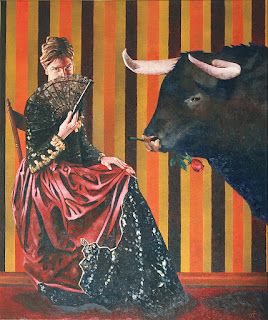 This painting is part of my current series, Tournament of Shadows, begun with The Lady and the Lions –and I'm about halfway done the next painting in the group, Embroidering the Truth (which makes three in a row that feature Ashley Winning).

While I sometimes will post photos of my works in progress elsewhere and show images of a painting's progression on my blog here, they don't usually get their own post, but I did post an image of this painting at a stage where everything else was complete except for Carmen's (Ashley's) skin. The reason that WIP got its own post is because when I was playing around with it in Photoshop to post a sneaky preview on Facebook, the resulting juxtaposition of bull and dress re-contextualized my intent for the painting...and I really, really liked it.