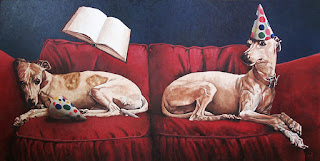 I've had photos of these two dogs on that red sofa on my hard drive for such a long time that I'd convinced myself that I'd taken the photos after spotting these ladies* in a store window while walking down Queen Street West in Toronto –despite that I don't actually remember taking them. Of course I don't remember taking them: Krista did while on a day trip to Cobourg with her family. It was some kind of "doggy daycare." It's weird how memory works, and mine doesn't usually fabricate information like that.

There is one photo that has both dogs in it, but I combined two separate shots of each to make this composition work better on the very wide canvas.
Then I added the hats.
Then the book.

*an assumption based on their (originally) pink collars