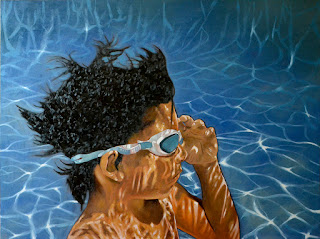 This commissioned piece features one of the boys in the canoe in Life Jackets (his brother, Gus, got his own commissioned painting featuring him diving off a dock).

The challenge here beyond capturing the likeness and pose was making the underwater effects look convincing. His hair (actually a deep dark mass) looks like it's sparkly or something, but that's just the shiny paint catching reflections -a side-effect of the way I paint and the crisscross textures my surfaces have. 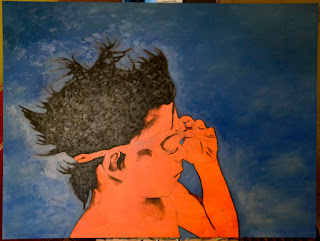 First thing's first (obviously). Here I'm playing with the hair to look like it's undulating underwater and not being blown by the wind by making the groupings (or locks) flow in different directions. 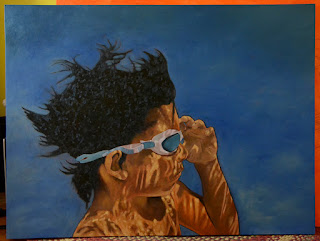 At this early stage, weird shadows look weird, but I had to trust that, after much more work, it'll work out and look like he's in a pool and not suffering from some kind of skin condition or tanning accident. 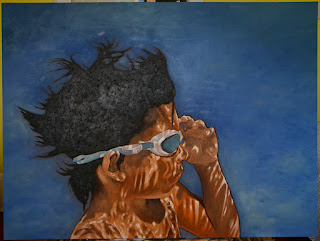 No point in working on the background water effects if I get the skin wrong here, so, putting that off a bit, I continued rendering the shadows and reflections from the pool's surface onto Reed. I decided not to tint him a cool blue shade so he would contrast more warmly with the cold blue water.

The reflections on the pool's floor were done freehand, trying to look as natural and irregular as possible, trying to avoid a grid- or web-like pattern. Super white highlights at some of the intersections help to sell the effect.

Unknown said…
This hangs in our livingroom and everyone comments how beautiful it is. Thank you again Mave and Mike
12 September, 2020