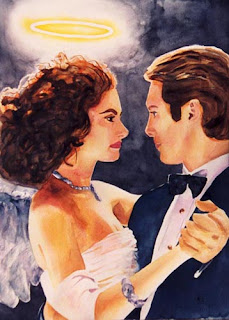 
The hands are kinda wonky, but mostly deliberately so: I wanted more emphasis on the couple's faces and thought I'd try to create a sort of illusion of shallow depth of field by fudging out the hands (rather than blurring, which I was clearly unable to do). Now it just looks anatomically incorrect.

I added the wings and halo for no particular reason other than I thought it would look nice and maybe a bit unusual; it certainly wasn't due to any religious feelings or belief that angels actually exist. I think the glow in the hair due to the halo is quite effective (as is the glow around the dress) while the halo itself is a bit too glowy.

Incidentally, the models are Mädchen Amick and James Spader from the time just before I started taking pictures of my own models.