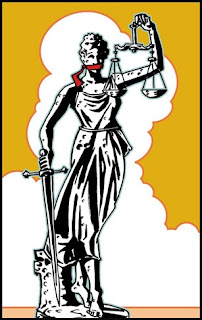 This is the image used as part of the poster I made for Dave Carley's play Taking Liberties, which was in this year's Toronto Fringe Festival. It was a great and complex play with excellent performances by the five actors, was a huge success, received rave reviews, and I was happy to be a small part of it all.

I drew Lady Justice in pencil, inked it, scanned it, then used various software programs to make the clouds and colour it all in. The text info for the play was also done digitally and can be seen in full as part of my show of this and several other posters on Thursday night (details below).

SpeakEasy's 13th Annual Illustration Show, Thursday 04 September 2008
Take a peek inside the collective imaginations of 29 talented illustrators whose work features original styles, techniques and media. SpeakEasy has a reputation for showcasing the talent of Toronto's best illustrators. This colourful event is sure to be a myriad of fun in typical SpeakEasy Fashion.

Cover:
Pay What You Can ($4.00 Donation Suggested)