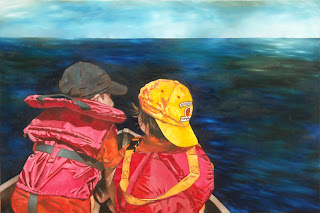 As I was nearing completion of my Field to Canvas portrait series, I took on this commission, feeling confident that I could paint this (despite its huge size) and still paint the remaining few portraits in time for the opening in June. Everything worked out very well.

The photo I received as reference for this painting showed the two boys from behind (thus featuring their life jackets), which was fine, but I felt the framing of the photo didn't give much information about context (where were they? in a boat? on a dock?) and it wasn't a very interesting composition. The red box below indicates the composition of the original photo ref: 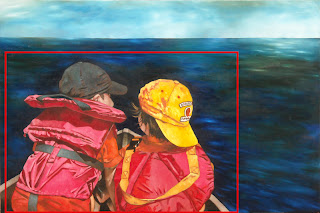 Since the woman who commissioned this (the boys' mom and, ultimately, a very satisfied customer) wanted a very large painting, I felt I could expand the composition by "pulling back the camera," so to speak, and still make the boys quite large in the final piece.


Changes/additions:
I added a horizon line to allow for some sky and to break up the picture a bit. This was the first thing I thought of adding when I first saw the original photo.

I positioned the boys on the left, giving them plenty of breathing room as well as making it appear as though the one on the left is looking toward that bright area I invented (this effect is greatly assisted by the fact that, not only is he already facing that direction, but he's leaning that way, too). And I like how this shift put the other boy's yellow cap in the dead centre of the painting.

Also, the original photo didn't show much of the boat, so I cheated and widened the sides and created the prow, making them unmistakably inside a canoe (rather than possibly appearing to be on the edge of a dock).

Below are a few shots of the painting in progress: 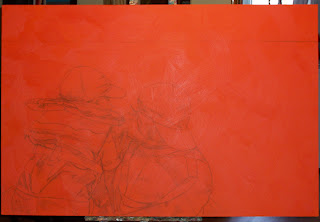 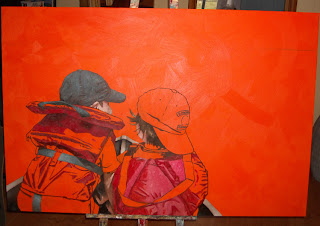 Starting with the darks. 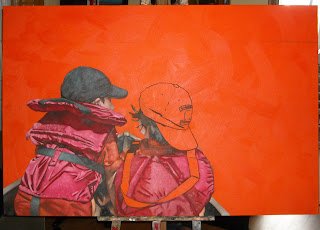 The titular life jackets were next. 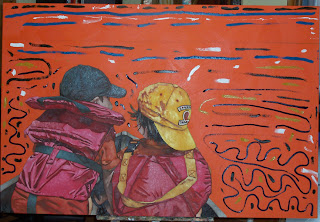 Boys completed, it was time to paint the lake,
mixing the colours directly on the canvas.