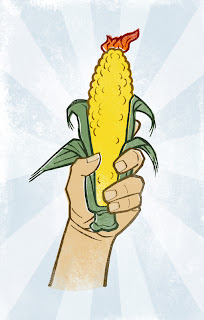 8.5" x 11", ink and digital, 2011
Happy with the results of my illustration for the Picton Picturefest Afterparty, I went immediately to work (later that same night!) on the illo for Small Pond's upcoming event, Cornography. With this one, I wanted to use similar grungy textures and the faux screen-printed look of the other poster, but I wanted to use a slightly bolder drawing style closer to the way I usually draw.

The original concept for the illustration involved a sexy pinup of a corn cob based on one of the famous photos Marilyn Monroe did for Playboy --which was tasteful enough, but for humour's sake I was going to add black "censor" bars over the "naughty bits." Krista and I discussed my sketches based on this idea, then decided that the event was more celebratory of food than anything else. We brainstormed a bit and came up with a cross between a Soviet-era propaganda poster and a nod to the Statue of Liberty's torch-holding hand (I even stole the design of the cob's tuft from the flames in Liberty's torch).

My photo reference for this was a picture of a cob of corn and a picture of my own hand holding my pencil case (this was very late at night and going to the store for some actual corn wasn't an option). I inked this with a black Uniball Vision (which I usually only use for sketching), then added the colours and textures in Photoshop. I deliberately nudged the various layers of fill colour to simulate misregistered screen printing. 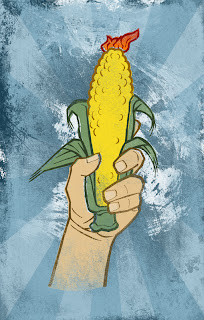 A little muddy, but kind of neat.
Above is the original background with thick and luxurious textures. I simplified this for the final poster so the hand and radiating lines would read better.
We often make inexpensive black and white half-page flyers and I went through a few variations of my illustration until we settled on the one below for this use: 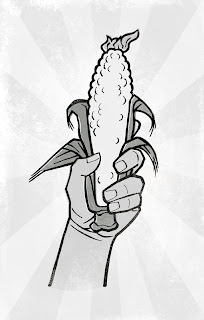 Simple, clean, and easy to read.
Although I like the one below for the texture and plain, yet bold, white fill of the illustration, the background textures would make the info text hard to read: 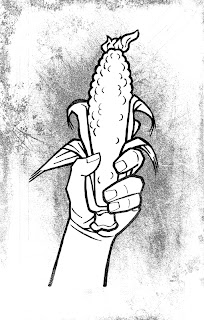 I created the final poster layout (with text for the event information) in CorelDraw: 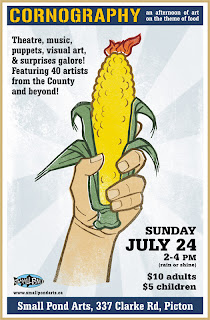