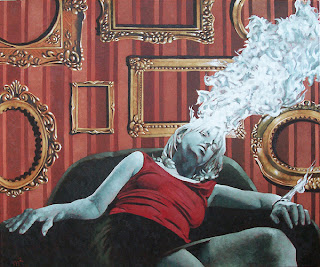 The painting's title is lifted from a line in the song Concertina by Tori Amos:

but the content is inspired by my own experience with fierce calmness and is probably my most metaphorical and personal painting.

Here is a somewhat relevant blog post by Krista dealing with The Dark Night of the Soul.

I'm using the same photo reference of Kim here that I used for Without List 2, but this time it's used better, and not just because it's bigger and I've now got a better likeness of Kim; all of the additional elements make this a stronger painting.

Interesting aside: while putting together a music playlist to play as lobby music before and after screening Apocalypse Now at The Regent Theatre as part of the monthly Classics series that I program, I discovered I quite liked The Rolling Stones (after many years of being casually indifferent to their music) and obsessively played 3 CDs worth of their greatest hits exclusively during the painting of this picture. You'd think I'd have been listening to Concertina or at least a playlist of Tori Amos songs (which I have and I do), but this caught me off guard as well.


*I'm using this line as the title for an upcoming painting which, like this one here, is part of my Tournament of Shadows series.